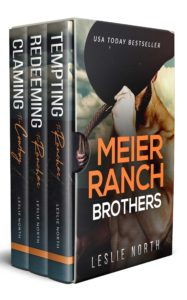 Spend the weekend with three rugged cowboys with the Meier Ranch brothers boxset. This new western romance boxset by Leslie North will warm your heart and your cheeks!

Book One: Tempting the Rancher

Texas rancher Nathaniel Meier always puts his responsibilities first. With his father dead, his brothers away, and his mother off “finding herself,” it’s Nat who runs their sprawling ranch. But with cattle to sell and the bank breathing down his neck, he needs all the help he can get, even when that help comes from the last person he ever expected to see again—his childhood sweetheart January Rose.

Free-spirited January always dreamed of traveling the world. The moment she turned eighteen, she left Close Call, Texas behind and barely looked back. So now that she’s home, she intends to stay only long enough to earn some cash and get back on the road. But when she comes face to face with Nat Meier, she quickly realizes the boy she left behind is now all man.

Even for a nomad like January, wanderlust sometimes gets lonely, and Nat is the one person who’s called to her, even after a decade apart. But for a man ruled by responsibility and a woman whose suitcase is her home, the future is uncertain. And the closer they get, the more Nat worries he’s going to get burned…again.

He’s surrounded by darkness. She’s the one who can lead him into the light…

After his recent military tour, Wes Meier wants to hang up his helmet and focus on his family’s Texas ranch. But when he meets Olive, his focus shifts. The fascinating, gorgeous, and not-at-all-his-type artist wants to use him as inspiration for a local sculpture, but Wes just wants to retreat. He came back home for peace and quiet, not to be immortalized as a hero. Even worse, she’s the sister of one of his fallen comrades, and having her around makes him remember experiences he’s desperate to forget. Livie is challenging his grasp on civilian life, but she’s fast becoming an attraction Wes is powerless to resist.

Artist Livie Blake may not wear her emotions on her sleeve, but art is in her soul. She’s in Close Call, Texas for an important commission, and to explore the town her dead brother told her so much about. When she meets Wes, she doesn’t exactly hit it off with the rugged cowboy. He’s handsome, cocky, and completely closed off, but Livie’s sure she’s found her inspiration for the military memorial. Wes can try to keep his distance, but Livie is determined to learn the serviceman’s secrets. And the more she discovers, the further she falls for the wounded warrior.

Livie never trusts her emotions, and Wes wears his wounds where no one else can see. Can the tortured artist and the damaged hero ever open their hearts to love?

A rodeo star who’s as wild as a bull…and the woman who ropes him in.

Rodeo rider Chace Meier has had enough of hard hits, wild women, fame and fortune. He’s ready to find a new dream, and being at his family ranch has always kept him grounded. So when he’s asked by a friend to help open a distillery in his hometown, he’s raring to go. Only one thing stands in his way—the prim and proper mayor of his Texas town. The sedate and sophisticated Gretchen de Havilland has not one red hair out of place on her gorgeous head, but not even her adorably aloof attitude will put Chace off. He’s looking to put his town on the map, and he’ll turn on all his charm to do so.

Town mayor Gretchen de Havilland has her professional career all planned out. A few more years in local politics, and then it’s on to her dream of being attorney general.

Pick up the ENTIRE Meier Ranch Brothers series from: