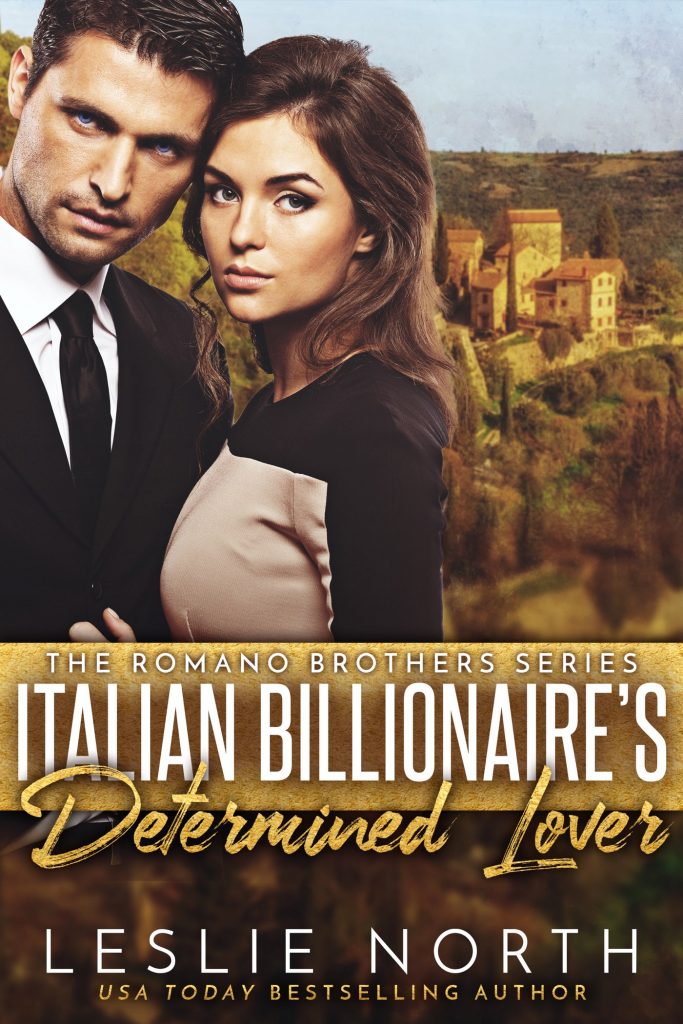 Leonardo Romano is well known for his expensive taste and gruff nature.

With a deliciously lean physique.

And those full Romano Brothers lips.

Yes, Leonardo is quite the package… with a very nice package!

Discover Leonardo in your copy of the Italian Billionaire’s Determined Lover.

The Romano Brothers Series is also available as a boxset from Amazon, GooglePlay, iBook, Nook, Kobo and Audible.

Leonardo Romano has made an independent fortune as a boutique hotel magnate. He has the golden touch when it comes to creating luxurious accommodations, but the one thing Leonardo has avoided is following in his Grandfather’s footsteps. Running the family’s original hotel, the Romano Resort, on the island of Sicily, is a job he’s never felt fated to revive. However, now that his brothers have done their parts in securing and remodeling the hotel, it’s up to Leonardo to do what he does best: entice visitors to revel in the lap of luxury.

Stella Brown is on her last strike. As a historical preservationist she’s just committed the mortal sin of losing a historical property to modern renovations, therefore losing a piece of history. Forever. Now Stella is tasked with proving she can still do her job by halting the Romano Resort’s extravagant renovations and getting them to conform to international preservation laws. Stella isn’t a pushy person, but she’s ready to go to war to save this little piece of Sicily.

But Stella finds it’s not just the island that’s stunning: the man who owns the resort is gorgeous too. Beautiful and bold, Leonardo is no stranger to bending laws and women to his will, but in Stella he’ll find a sunny beauty with a spine of steel — one that’s ready to shut down the hotel rather than see its historical significance erased in swaths of cashmere and gold plated toilets. As the two connect over their desire to see the Hotel Romano refinished properly, they’ll find their views of each other building to passionate proportions. As time runs out and luxury continues to battle with laws, they’ll have to decide if compromise is possible or if everything will turn to dust.

Mr. Romano?” The handsome man’s slack face was a sure sign of his incomprehension at what Stella had said. He was tall with shoulders so wide that she wouldn’t have been able to wrap her arms around him and touch her hands behind his back. His black hair was thick with a natural curl that made her fingers tingle with the desire to play in it, but most of all she wanted to trace the little widow’s peak on his forehead.

She bit her inner lip. She was sure that she’d seen him on the cover of some fashion magazine. Men who looked like he did were like unicorns; they didn’t actually exist in nature. She blinked, half expecting him to morph into someone a foot shorter, fifty pounds heavier and twenty years older, but when she opened her eyes again, he was every bit as devastatingly handsome as he had been before.

It wasn’t fair. Men weren’t supposed to look like him in real life. It made it hard to think, and Stella’s job was on the line. She had to stay focused. She had to get this right. If she failed to make the owners of the Romano del Mare toe the line with regard to maintaining the integrity of such an important example of medieval architecture as the Romano del Mare, she would be out of a job. It was as simple as that. And her job was important to her.

“Scusi?” Leonardo asked, stopping half the way to her with his brows arched high enough to crinkle his forehead.

“I’m Stella,” she said, and then added, “Stella Brown,” when Leonardo’s expression didn’t change. He didn’t seem to recognize her, but she knew him. She’d thoroughly researched the talented, billionaire Romano brothers—co-owners of the Romano del Mare—before making her trip halfway across the globe. She’d seen Leonardo’s picture online, but the grainy photographs hadn’t done him justice. The eldest Romano brother looked like an Italian movie star, and Stella had to fight against her desire to simply stare at him like a dreamy-eyed schoolgirl.

Finally, when Leonardo didn’t move, Stella charged forward with her hand extended in preparation for a handshake. But her long, sure gait fumbled when she tripped and fell head long out of control only to end up in Leonardo’s incredibly strong arms, leaning over as if he had dipped her for a kiss. It was humiliating, to say the least, but feeling his long arms wrapped around her, she didn’t care. Instead, she reveled in it. Embraced it. It was the moment she was in, and she would enjoy the pleasures it had to offer rather than wallow in a negative haze of her own perception’s making. Swallowing, she did her best to refocus. She still had a job to do. “I emailed you?” she said as both a question and a statement, staring up into his unbelievably blue eyes. She could lose herself in those eyes. Without her permission, her hand reached up to touch a finger to the tip of Leonardo’s widow’s peak. She wanted to do more. She wanted to trace the contours of his face, but she knew that she needed to behave. Her no-holds-bar zest for life wasn’t within everybody’s comfort zone, and she didn’t want to alienate the man she would have to work closely with over the next several months.

Leonardo blinked but continued to hold her as she was, tilted backwards in his arms, until finally Stella offered up her hand between them for a handshake. “Stella Brown. It’s wonderful to meet you.”

Now that’s a memorable first impression! Find what happens next between Stella and Leonardo, grab your copy of Italian Billionaire’s Determined Lover at:

The Romano Brothers Series is also available as a boxset from Amazon, GooglePlay, iBook, Nook, Kobo and Audible.