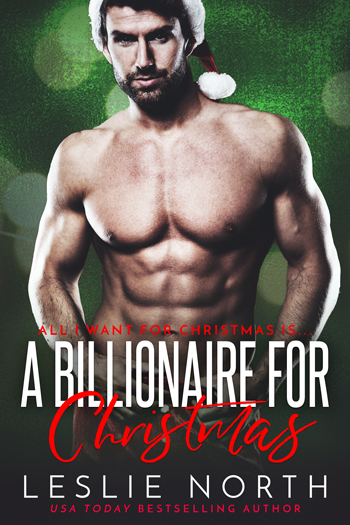 Now it’s the final book in my All I Want for Christmas is… series! After you’ve tasted a gorgeous Sheikh and a red-blooded SEAL, it’s only fitting that dessert comes in the form of A Billionaire for Christmas!

Heath is sweeter than a candy cane, spicier than gingerbread, more potent than eggnog and well… let’s just say his pants are more stuffed than a Christmas turkey ;P

I can’t wait for you to meet him. He has met his match with Aileen! She is smart, straightforward and unstoppable!

Read more about this gorgeous woman and hunky billionaire in your copy of A Billionaire for Christmas at:

Snow is falling in Central Park, but this Christmas is going to be hotter than ever when a smart-mouthed journalist unravels a tightly wound billionaire.

When billionaire businessman Heathcliff Goldwin III returned home for the holidays, he never expected to be at the heart of a New York society scandal that thrusts him into the spotlight.

Attention is the last thing Heath wants, so when he learns his friend Murphy hasn’t heard from his journalist sister, Heath sees the chance to lay low and repay a debt to Murph. He’ll locate Aileen, keep her safe, and the whole scandal thing will blow over. But when he finds the petite brunette disguised as Santa and tailing a shady senator, Heath knows she’s in over her head. He should just tell Murphy where Aileen is and move on, but he’ll give her the chance to get her story…even if it means not letting her out of his sight.

Journalist Aileen Coen is hot on the trail of a crooked senator about to bilk innocent people of billions when her brother’s friend steps in to try and stop her. Even if Heath Goldwin hadn’t served in the Navy with Murphy, Aileen would recognize the Manhattan mogul’s handsome face and intense gaze from the tabloids all over town. He may be rich and powerful, but when Heath wants to drag her home to her brother, Aileen won’t back down…even if it means bringing Heath into the investigation with her.

As they work together to take down the corrupt politician, the chemistry between Aileen and Heath reaches the boiling point. Tight-laced Heath isn’t one to give his trust easily, but will Aileen be the woman to make him come undone? Shayma and Murphy’s chemistry may be undeniable, but as the stakes get higher, can Murphy open himself up to love? Or will he be forced to choose between Shayma and finding his sister?

There was a slight break in the line of people waiting to meet Milford Lawrence and Aileen seized her opportunity. Nudging her way into the front of the line, she held up a small digital recorder and flashed her most brilliant fake smile up at Senator Lawrence. He wasn’t exactly what one would imagine a criminal mastermind to look like—mid-sixties, a bit portly, with a kindly-looking smile and hunched shoulders that gave him a perpetually stooped posture. Everything about the guy screamed non-threatening. But Aileen had learned a long time ago that looks could be deceiving. And if her hunches were right and this guy was involved in the biggest case of fraud involving a clean energy company in US history, well then, she intended to nail his ass to the wall like a bug under glass.

“Senator Lawrence,” she said, shoving the recorder in his face. “Aileen Coen from the New York Daily Globe. I’m writing an article about suspected fraud within the country’s energy providers. Want to give me a quote on your committee’s recent approval for a huge, multi-billion-dollar government grant to clean-energy company EnKor for its research into making geothermal energy the ‘New Oil’?”

For a moment, the senator just stared at her, as if taken aback by the question. The vote on the congressional floor to approve the funds had only taken place two days prior and had mysteriously gotten very little coverage in the press. The only way Aileen had gotten wind of it was through one of her trusted contacts in Washington, DC.

Senator Lawrence seemed to recover quickly, however, though his smile was a bit less kindly than before. He gave her a cool stare from behind his wire-rimmed glasses. “No comment.”

Then Lawrence flicked his wrist, signaling to his bodyguards again. The same two beefy guards emerged from behind the circle of Secret Service agents and headed for Aileen.

Shit. She took a step back and ran right into Heath, his body a wall of heat and muscle.

“Going somewhere?” he asked, his gaze locked on the henchman. “We need a distraction, something to throw them off.”

“Well, I don’t know what that’s gonna be. The guy’s staring right at us and—”

With a muttered curse, Heath wrapped his arm around her waist and spun Aileen to face him. His eyes sparkled with annoyance as he lowered his head to hers. “The fucking sacrifices I make for my friends.”

With that, his lips closed over hers and the world around them seemed to dissolve.

Surprised, Aileen gasped and Heath took advantage, his soft tongue sliding into her mouth as his arms tightened his hold around her. He tasted of mint and coffee and pure male desire and she was intoxicated. Lost. Knocked clean off her feet. Aileen moaned and slid her hands around his neck, into those blond curls of his, discovering they did indeed feel as soft as they looked.

Gone was her common sense, gone was any rational idea that this was all for show, that this was only to keep the guards from hauling her ass off to some warehouse somewhere and chaining her to a wall until the senator’s deal went through without a hitch. Already, a small crowd had formed around them, clucking and cooing and gushing about the magic of the season.

Yep, it was certainly magic all right, if the way her senses zeroed in was any indication.

How does Aileen react to this kiss? Find out in your copy of A Billionaire for Christmas today. It’s available at: