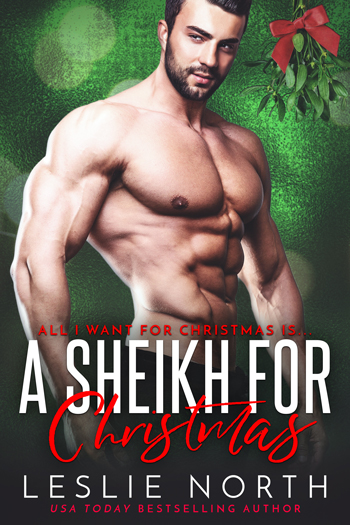 It may be cold outside, but the snow begins to melt when an unlikely couple comes together during the Holidays…

Christmas is right around the corner, but after creating a society scandal, New York heiress Melody Hascall-Ebons has nowhere to turn. Cut off by her family for running away with an actor—who turned out to be using her for publicity—Mel is penniless, homeless, and disgraced. There’s only one place to go, and that’s back to the fiancé she ditched. But instead of her ex, she finds his friend Daveed Rafik. The handsome military translator disarms Mel with his easy smile and surprising sympathy. But as she struggles to get her life on track, the last thing Mel needs is to fall into the strong arms of her ex-fiancé’s best friend.

Counter-terrorism expert Sheikh Daveed Rafik has spent his career dealing with delicate and dangerous situations, but none of them compares to Melody Hascall-Ebons. He’s supposed to be helping his friend Murphy find his missing sister, not consoling the spoiled rich girl who dumped their buddy Heath. But the more he learns about Melody, the more he likes. With her unexpected intelligence and distinctive beauty, Melody calls to him in powerful ways. But when the woman he is arranged to marry shows up, Daveed’s highly organized life suddenly gets very complicated.

The streets of New York are steeped in holiday cheer, but can Daveed and Melody thaw the ice around their hearts enough to make room for love?

Get your copy of A Sheikh for Christmas today. It’s available at:

His instincts and past had told him his best friend Heath’s marriage to the diva of downtown Manhattan, Melody, would be a disaster. This, however, was worse than he’d expected.

The irritating knock on the condo door continued and he walked over to answer, still distracted by the newspaper he held in one hand. Guess his phone call to check in with Heath would have to wait. Honestly, he’d only met his buddy’s rich girlfriend du jour once or twice, but if she was stupid enough to give up marrying one of the most decent, honorable, wealthy men on the Eastern seaboard for a fling with an actor who looked as though he’d definitely seen his better days come and go—well then, good riddance!

“I’m not interested in buying whatever it is…” he said as he yanked the front door open, his voice cold and his expression flat, at least until he got a good look at who was gracing the threshold. None other than the designer-dressed femme fatale he’d just been reading about. “What the hell are you doing here, Melody?”

The two other occasions he’d seen her, she’d been dressed to the nines in the latest ready-to-wear collections from Paris’s hottest designers. Today, though, she looked decidedly… soggy. It had been sleeting most of that morning, not uncommon for a New York December, and from the drowned-rat looks of her she’d been exposed to all of it. Her normally curly blonde hair was stuck to her head and dripping with water and her clothes looked soaked, as did her impractical suede stiletto pumps. Even the waterproof Louis Vuitton suitcase in her hand appeared ready to give up the fight.

When she didn’t answer him, his gaze drifted back to her face. His years as a counter-terrorism expert working with the US military had given him excellent people-reading skills, but it didn’t take a genius to tell from the dark shadows under her eyes and the tightness at the corners of her lips that she wasn’t having the best day ever.

“Melody?” he asked again, more gently this time. “What are you doing here?”

“I was going to ask you the same question. This is still Heath’s condo, right?” Then her explanation tumbled out in a flurry of stress and confusion. “Listen, it’s pouring outside and I couldn’t get a taxi because it’s December and everyone’s Christmas crazy already and then I got the Uber driver from hell and I don’t have any money for a hotel room and—”

“Wait a minute. Slow down.” Daveed ignored the slight throbbing of tension behind his left temple and crossed his arms, leaning his shoulder against the doorframe to block her entry. His loyalty was firmly in his buddy Heath’s corner, and given the way she’d run out on his friend without so much as a word goodbye just a month before their wedding, he wasn’t inclined to feel much sympathy for her, despite her predicament. Besides, her slick, tough New Yorker act mixed with too much privileged little rich-girl turned his stomach, frankly. Not to mention the twenty-grand bill Heath would still be stuck paying for the wedding that wasn’t.

“Heath’s not here. Sorry.” He straightened and started to close the door in her face, thinking it was no more than she deserved. “Goodbye.”

Perhaps it was the slight quiver in her voice signaling the start of tears. Perhaps it was the desperation in her tone that reminded him a bit of the homeless civilian kids they’d helped find lodging and food for in war-torn Iraq. Or perhaps it was the toe of her expensive pump, which she’d jammed into the crack of the door to prevent him from shutting her out.

Whatever it was, Daveed found himself exhaling slowly and opening the door again, against his better judgement. He had more important things to deal with that day, like helping his other best bud, Murphy, locate his missing sister. Yet here he was, listening to a sob story from the last woman in Manhattan he should give two fucks about.

“Please don’t turn me away,” she said again, sniffling. “I don’t have anywhere else to go. Unless you tell me where Heath is so I can go stay with him…”

He bit back a smartass suggestion that maybe she try sleeping in the fancy ballroom at the Plaza Hotel she and her ritzy parents had suggested Heath pay top-dollar to rent. According to them the wedding that wasn’t should’ve been the society event of the year. Which, in a town where pretty much everything of note in the world of wealth and power occurred, was saying something. Instead, Daveed reluctantly opened the door wider and gestured for her to come in. It was by no means an invitation for her to stay, but he couldn’t have her dripping all over the hallway carpet either. He closed the door behind her then tossed the paper aside, not quite ready to play nice yet.

“What’s the matter? Mommy and Daddy cut you off?” he joked. At least he thought it was a joke, until she burst into a fresh round of tears and sank down on the edge of Heath’s custom-made leather sofa, wet clothes and all. Cursing, he rushed to the bathroom and grabbed both towels and a box of tissues then rushed back to hand them to her. “Jesus, Melody. Pull yourself together.”

She looked so pitiful sitting there, he almost felt sorry for her. Almost.

“I know you p-probably h-hate me,” she said, hiccupping around a sob as she dabbed her nose and face with a towel. “A-and I don’t b-blame you. But I swear I liked H-heath. I always have. I g-guess I just never t-thought we’d actually g-get m-married.”

Daveed raised a sardonic brow and slumped down into an armchair across from her. “That is usually what happens when one accepts a marriage proposal. Rings are exchanged, those sorts of things.” The three-carat diamond engagement ring Heath had bought her was gone and his anger toward her on behalf of his friend flared once more. Had she pawned it already? Lost it on the beach in Tahiti while she cavorted with that tap-dancing asshole Jefferson Hanks?

“I know that.” She managed to collect herself enough to glare at him. “I’m not stupid. Well, considering the mess I’ve made, maybe I am.”

He wasn’t inclined to disagree, though she did seem genuinely distressed and damn if Daveed hadn’t always been a sucker for women needing rescuing, even one as treacherous as the Princess of Pain over there. While she shrugged out of her trench coat and carefully placed it atop a towel on the floor to dry, he studied her more closely. She wasn’t beautiful, that was true. Her nose was a bit too long and her jaw a bit too strong for that. But she was striking, with her long blond curls and icy blue eyes. The clothes helped too, their expensive tailoring and fabric still managing to hug her curves in all the right places. Not that he was looking.

Nope. Not at all.

“My parents have locked me out of their Park Avenue townhouse. They’ve cancelled all my credit cards too.” She sniffled and blinked down at her left hand, new tears spilling down her flushed cheeks. “I had to hock the engagement ring Heath bought me just to buy a plane ticket to get back to the States.”

Despite his anger toward her betrayal of his friend, an unwanted pinch of empathy toward her stung his chest. Still, he wasn’t going to let her get under his skin so easily. He wasn’t a man who trusted easily, and she’d already proven herself a poor risk. He reverted back to his usual stand-by: sarcasm. “Your new boyfriend Jefferson didn’t foot the bill, huh?”

“He’s not my boyfriend,” she snapped, using another towel to carefully dry the sofa cushion off before placing it beneath her then taking the final towel to squeeze some of the moisture from her hair and body. Daveed did his best not to follow the trail of that towel down her long, slim neck, over her delicate shoulders to her surprisingly ample breasts. Were they real? He clenched his fists against the appalling urge to find out. This woman was his best friend’s ex. Which should put her so far off limits he’d need GPS tracking to find her.

“Jefferson Hanks is nothing but a self-centered jerk who promised me the moon and stars and I was dumb enough to fall for it.” She yanked more tissues from the box and swiped them under her eyes before blowing her nose loudly. “All he really wanted from me was the publicity that comes with my name. God, maybe I really am as dumb as everyone’s always told me. My parents had planned for me to marry Heath for years, whether I wanted to or not.” More tears flowed. “I should’ve just gone along with their plan, I suppose.”

Crying women were normally his kryptonite, but damn if a bubble of sympathy didn’t burst inside him for Melody. Daveed knew only too well the pain of being pushed into an engagement one never wanted.

Get your copy of A Sheikh for Christmas today. It’s available at: