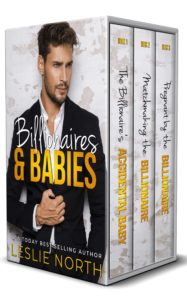 Connie Bonner has spent her life working hard and following her passion, never too worried about how things will work out or where her life is headed. But after one unforgettable, passionate night with Brian O’Leary, her gorgeous former boss, her life has ground to a halt. Now, she’s pregnant. Facing the biggest responsibility of her life. Worse, Brian’s new girlfriend and soon-to-be fiancée is demanding Brian not be named the father and that Connie sign a non-disclosure agreement. But when Brian begins to help Connie prepare for the baby, she finds herself dreaming about not just their child but a family with the billionaire as well.

When single mother Haley Renault’s boss, Nicholas Hunter, makes a bet that he’ll get married before his buddy does, Haley sees the perfect opportunity. While Haley is no romantic, she firmly believes her dating app can find anyone—even self-centered, maddening Nick—a perfect match. If she can show Nick the app actually works, then he might approve it, and Haley’s dreams of success could begin. There’s only one hitch. The man Nick presents to the outside world is nothing like the caring, selfless one she’s getting to know—the one she’s starting to fall in love with.

Pregnant by the Billionaire

Donovan Fitz lives by the saying: Go big or go home. And what could be bigger, and draw more attention to him and his mega-billion-dollar video game business, than creating a reality TV show about his quest for a wife? He’ll just have to deal with the distraction of his sexy producer, Melissa Hampton, and try to forget the amazing night they spent together. It’s all about the show, the attention, the ego-building blaze of publicity…until he finds out Melissa’s pregnant with his baby. Now all Donovan wants is her. But the plot twist of becoming a father while still looking for a wife is ratings gold and could be the big-break Melissa deserves. If only he can convince the camera-shy Melissa that putting their story out there would be good for both of them.

Get The Billionaires & Babies boxset from: