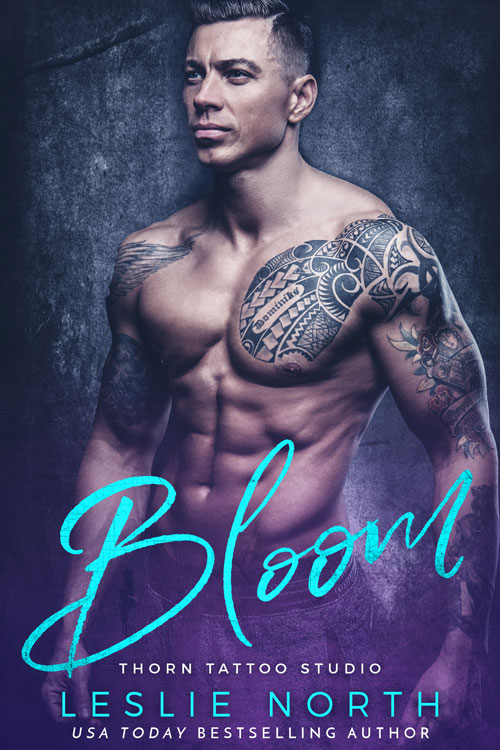 What happens in Vegas, stays in Vegas.

But some kisses and bites live on long past the city.

“This is an amazing book with so much chemistry that you will get HOT. Highly recommend this book.“

The steamy third and final book in my Thorn Tattoo Studio series has just been released! Thank you to everyone who read and wrote a review for the DeRose brothers.

It’s hard to pick a favorite out of these tattooed hunks, but Antonio is one alpha male that’ll stick around in my mind.

Built like a swimmer, he is tall, thin, with broad shoulders and cut muscles. And those dreamy ice blue eyes – yes please!

Find out exactly how hot Bloom is. , you can get your copy at:

From the boardroom to the bedroom, Antonio DeRose is a man who always gets what he wants. And Antonio wants Evie.

Antonio took a risk when he purchased Bloom Tattoo. The studio is a “fixer-upper” that could pay off in spades…or cost him Thorn, the family’s studio. He knows the key lies in making Evie Stuart, the tattooed sex kitten, head artist. He can see that beyond her beauty, that the fiery girl has some serious brains too.Evie, on the other hand, is more than happy to continue being a tattoo artist. She likes being free to follow the wild creativity of her imagination without risking the livelihoods of other artists. Because even though Evie can’t stop thinking about his scorching touch, she has no desire to share a boardroom with him.

Evie, on the other hand, is more than happy to continue being a tattoo artist. She likes being free to follow the wild creativity of her imagination without risking the livelihoods of other artists. Because even though Evie can’t stop thinking about his scorching touch, she has no desire to share a boardroom with him.

While pride brings them together it’s their shared desire that has them entangled. At first, Evie thinks that their head banging sex will keep her career change at bay—but when their shared passion begins to bleed over into the business, can either pull away from their love without losing everything? Or will they finally realize that you really can have it all?

As Antonio walked forward to join them, Theo held out his hand to shake replying, “You got it.” Evie figured that he was a shoe-in for new head artist, and sweet-talking Antonio was sealing the deal. That was fine by her. Theo was a good artist, and he had a good head on his shoulders. The rest of the staff would listen to him, and the gentle giant knew how to get scary if he needed to sort out something unpleasant. “This is the rest of the crew. We’ve got Red—”

Evie winked when Antonio looked in her direction, and it may have been her imagination, but she could have sworn he let his gaze linger on her for a few seconds longer than it should have.

Antonio looked away and surveyed the room, but she kept her eyes on him.

“It’s nice to meet all of you,” Antonio said. “I know this is a difficult time. Change is never easy. I hope that we’ll be able to get through this transition together and grow from it. I have big plans for Bloom Tattoo, but they’ll take a while to realize. Until then, I need you all to hang on. I promise, when the shop is up and running at the capacity I want it to be, you’ll see it was worth the effort.”

He was charismatic enough that Evie believed him. She studied him as he spoke, remarking his posture and making mental notes on his appearance. As an artist, she had her eye on angles and shapes, and she wondered what it would be like to paint him.

A lot of hard angles. A lot of intense emotion, masked just enough that it was hinted at. The dark spread of stubble across his jaw and down his throat was sexy as all hell and would take finesse to reproduce. The gorgeous cut of his clothes would complement his natural features well.

“What’s happening with the support staff?” Kimi asked, cutting straight to the point. “We heard that you don’t want to close us down while we restructure. We stayed open today without anyone running the desk or offering piercings and it was hell. We had to turn away a bunch of clients coming in looking for body mods because we didn’t have the staff on hand. What’s your solution?”

Kimi was brash and unafraid to have her voice heard. It turned strangers off. But Antonio didn’t skip a beat as he nodded and launched into a reply; either he was well rehearsed for this meeting, or he was unflappable.

“Luckily, there’s a stack of resumes and portfolios from hopeful piercers at Thorn Tattoo. I’m bringing one of my established piercers over temporarily while we train the new crew to our standards, and as soon as everyone is up to speed, I’ll be dividing labor between the two shops in a way that makes the most sense. Some of the new talent might work at Thorn, and some might stay here. Either way, you’re not going to be without piercers for long. And as for desk support?” Antonio took his phone out of his pocket and swept through it, searching for something. “I’m conducting two interviews tomorrow with highly qualified individuals. Until I find the right candidate, Iwill be working the front desk.”

There was silence. Antonio was the owner. Evie hadn’t expected him to be invested in his business on a ground level. No one had.

Owners didn’t work at their shops.

“Uh.” Red wheeled over so he was within arm’s reach of Antonio. “You’re going to work? Here?”

Evie couldn’t imagine Antonio’s dour face at the front counter. She pushed her lips together and tried her best to hold back a laugh. In the end, she snorted.

Antonio looked in her direction and arched a brow. “Yes?”

“Just, you know…” Evie found it harder and harder not to laugh. “Usually the front of the shop is someone kind of quirky and friendly. You’re super into business, and that’s cool, but I don’t know if it’s going to translate well into customers, you know?”

Antonio’s eyes hardened into coals. The dominance in that look turned Evie on, and she sat up a little straighter, unwilling to let her gaze part from his. “I’ll be fine, I assure you.”

“Oh, I know.” Evie grinned. “Just thought it was a little funny, that’s all.”

She looked forward to every second of it.

Get this dominant hunk on your e-reader today. Bloom is available at:

Haven’t read the previous books in the series? You can read Rose and Thorn now, with a combined 121 reviews, 4.5/5.0 star average!