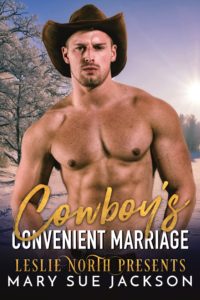 Charlotte Kennedy needs a husband—yesterday. Her entire life she believed she was a U.S. citizen, but it turns out she isn’t. Now, to claim her inheritance and continue running the company her late father just left to her, she has no choice but to get married—especially with her brother threatening to expose her non-citizenship and take over the company. If only she had someone in mind… And then she remembers sexy cowboy Emmett Sawyer, who as a teenager proposed to her, just to make her laugh. She never gave him an answer then, but now it’s a definite yes!

Emmett’s reaction to marrying Charlie is an immediate and definitive no. She may be gorgeous, but getting married to a woman he’s barely seen since high school is not something he wants. That is, until he sees the conditions of his frail mother’s new nursing home and begins to rethink Charlotte’s impulsive proposal, which includes a nice cash influx for him and his struggling ranch.

This fake marriage would give him enough money to take care of his mother and maybe even help lift his ranch out of debt. But when his and Charlotte’s fake kisses turn into the real thing and Emmett starts letting his heart get in the way of common sense, he realizes he’s in real danger of falling in love with his pretend wife…

Cowboy’s Convenient Marriage is available from: