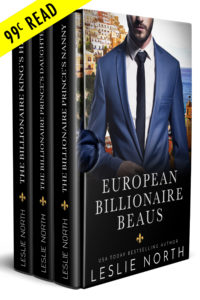 Book One:  The Billionaire Prince’s Nanny
Katie Crestley is in a world of trouble. A blacklisted journalist and desperate for money, Katie takes the only other job she’s remotely qualified for: nanny to the two adopted daughters of the youngest prince of Stolvenia. But just as she’s given up on her dream job, the editor of a major Stolvenian newspaper approaches her. With a new anti-royalist movement growing in the country, getting the dirt on the royal family could lead to big things for Katie’s career. She’s reluctant, but if she’d rather stick to her morals, then the editor will just have to let the royal family know about her scandalous past—ensuring she’ll be fired. With little other choice, Katie caves to the blackmail. The problem is, the longer she works for Prince Armin Albericht Von Roth, the more she realizes what a good, selfless man he is.

Armin always does what is right and believes everyone else should follow suit. Rules, and protocol are what’s important. So he’s taken aback when he learns his late best friend named him guardian of his two girls. What does he know about children? He’d thought a nanny would set things straight, but Katie is far too pretty, far too free spirited, far too distracting. She doesn’t follow rules. She doesn’t understand the importance of structure. She’s getting under his skin, disrupting not only his life, but his very thoughts—which seem to be centered more and more on her.

Book Two: The Billionaire Prince’s Daughter
It was only supposed to be a one-night stand. A bit of glitz, glamour, and champagne with one of the world’s most eligible bachelors. What single woman—and Amy Branch was certainly single—could possibly resist Artur, Prince of Stolvenia, who made a living out of being charming? He sure charmed her, all right. Charmed her right into a night of passion that resulted in a little present neither of them were expecting.

Now, all Amy has to do is find a way to tell Artur that he’s about to become a daddy. Easier said than done, but after months of trying to get word to him, she finally gets her chance. The playboy needs to be reformed to make the royal family more palatable to a country on the verge of voting to abolish the monarchy. That means Artur’s wild ways will have to end—with the help of a PR expert. A PR expert who just happens to be carrying the prince’s baby. What could possibly go wrong?

Book Three: The Billionaire King’s Heir
Felicity was the only person in the world who knew her daughter, Hope, is heir to the Stolvenia throne. Until a newspaper leaks the story and now everyone knows—including Hope’s father, King Raphael. The media storm surrounding what’s being called the century’s most romantic story is far greater than either could have anticipated.

On the plus side, with the public crazy about their “love” story, support for a referendum to dissolve the monarchy is waning. And when Raphael shows up at her door with a proposal, it doesn’t take much convincing for Felicity to agree to a marriage in name only. She needs to take care of her daughter and her wheelchair-bound sister who requires expensive medical care. Surely, becoming a queen and molding herself into a proper royal won’t be that much of a sacrifice to give her family comfort and security. And if she still loves Raphael? Well, that was another thing she could deal with.

Raphael has never stopped thinking about Felicity and wondering why she’d left him. She was the only woman he’d ever loved and for the past three years, he’d been trying to forget her. Now, not only had he found her, he’d also found out he was a father—something his devious late mother had tried to ensure he would never know. Now he’s seeing the future he’d once dreamed of for them—and the chance to bond with his daughter, to boot. The only trouble is…he has no idea how to be a husband. Or a father. Or anything other than a king. He’s lived for his people for so long—is it too late to learn how to live for himself?

The European Billionaire Beaus is available on: