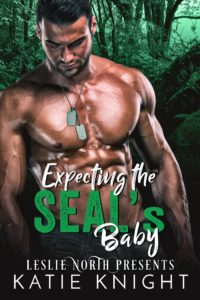 When you’re dating a Navy Seal, love is a battlefield…

Navy SEAL Jeremy Quinn has always had a thing for Gina Greenwood, his squad mate’s little sister. So when her brother goes missing, Jeremy’s the first person Gina turns to for answers and comfort. But what begins as a little emotional support soon leads to a scorching night of passion. A night neither of them can forget…

Weeks later, Gina shows up at Jeremy’s door with clues about her brother’s disappearance… and disturbing proof that she’s being followed. As his squad mate’s sister, Jeremy knows Gina should be off limits. But now that she’s a target, there’s no way he’s letting her out of his sight.

Gina swore she’d never date another military man. Still, Jeremy’s the only guy she trusts to help find her brother. She’s determined to resist his smoking good looks and masculine charm. But as their search leads deep into a dangerous South American jungle, life throws another surprise at Gina — she’s pregnant. And Jeremy’s the father.

Surrounded by danger and intrigue, it doesn’t take long for Gina to succumb to temptation. But the biggest danger of all may be losing her heart to a Navy SEAL…

Expecting the SEAL’s Baby is available on: