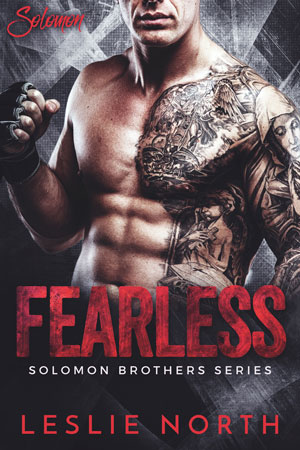 MMA fighter Henry Lorenz relies on discipline as much as strength to get through life. With his former mentor’s boxing gym now in his hands, Henry is busy training a new generation—including the troubled teen who reminds him of his own past. Despite a spirited social worker’s attempts to intervene, Henry won’t stop grooming the kid for success. The counselor is as stubborn as she is beautiful, but perhaps he can prove to her that there’s more to fighting than knowing how to throw a punch.

Guidance counselor Maggie Kavanaugh gives everything she has to keep kids away from the violence of the streets. She’s busy teaching teens to use their brains, not their fists, to get ahead in life. When one of her most talented teens begins training in MMA, Maggie doesn’t approve. The gym’s owner may be covered in muscles and tattoos, but Maggie won’t back down–especially when a scholarship is on the line. She’ll let the training continue, but she’s going to be watching every step of the way.

While Henry is trying to right old wrongs, Maggie is determined to shape the future. But as their attraction grows, a dark moment from Henry’s past threatens to come between them. He may be a man of few words, but should he stay silent when speaking up may ruin everything? Even for a fighter like Henry, none of us are fearless–particularly when it comes to love.

This book hits a lot of deeper themes and i think you’re really going to enjoy the fearless romance between Maggie and Henry!

Margaret Kavanaugh deliberately parked her rust-speckled sedan beneath the billboard in protest. Crowded with representations of every ethnicity found in the greater Pittsburgh metropolitan area, kids of varying ages all stood behind a smug likeness of the interim mayor—interim because the elected mayor had taken bribes, mayor because politics was the haven of home-grown wolves leading sheep. The peeling billboard lauded the success of the All Children Learn initiative.

Maggie sniffed at the irony. The ever-present decay of what was once a thriving warehouse district did little to dissuade her. She lived it. Every day, by choice, she lived it. For the first September since securing her teaching certificate five years ago, she wasn’t inside a classroom. The school climate had been insular and structured, with an in-the-trenches comradery she missed at times. But she had gotten out before the system could choke out the last gasp of optimism inside her. She forged her own path toward making a difference—one that didn’t force her to forfeit the talented few for the masses.

She slid her cross-body bag over her head, shot the mayor pro tem rigid double birds and hustled across the street to the non-descript gym housed over a long-abandoned Asian market.

By the time she had skirted the old brick building twice, searching for entry, her arteries were a toxic cocktail of caffeine, frustration, and full-dump adrenaline. Leave it to a fraternal playhouse with a back-alley basketball court to have a secret entry. No wonder the gym had to prey upon the community’s vulnerable youth to stay viable. Sol’s Gym could use a suppository of business savvy. She intended to tell the owner that. Just as soon as she figured out which steroid-driven Neanderthal was Sol.

Of course, it was Monday morning, eight a.m. Sol probably didn’t start his corruption until school let out.

Maggie startled and turned toward the deep voice. Attached to the voice was a man in a full-on business suit. Navy to be exact, set against a crisp, white button-down shirt, all seemingly two sizes too small, none of it substantial enough to conceal an extensive neck tattoo. His hair was dark, cropped close. The juxtaposition of an apparent gentleman in a dimly-lit dungeon did everything to throw her off her game.

The man stiffened and walked away. “He ain’t here.”

The curt response, the egregious grammar, the fully-visible neck tattoo now that he had begun to strip off his jacket—what was that, a sun?—conspired to rob her of her gentleman moment. She tailed him into a back office that looked as if it had been looted the last time the Alloys or Steelers won a championship, so forever ago she couldn’t remember. Not dirty, exactly, but cyclonic. He hung his jacket over the open door to a trophy cabinet filled with tiny brass figurines in barbaric poses.

Maggie picked her way past a box filled with blue flyers touting an exhibition fight. “He’s interfering with one of my students.”

The man continued to strip—his white shirt unbuttoned down to a chest-hugging tank top, belt stripped from loops at the waistband, navy dress socks balled and tossed onto a wooden desk. His muscles bunched and stretched with his movements, every inch of arm flesh sleeved in colorful ink like a Banksy on a sculpted canvas. She hated tattoos, hated the permanence of any one philosophy when a person should always be seeking enlightenment. More than that, she hated that she was gawking at the play of this man’s tattoos against the rather sinuous muscles beneath instead of focusing on why she came.

Get MMA Fighter Henry Lorenz and Margaret Kavanaugh on your e-reader today! It’s available on: