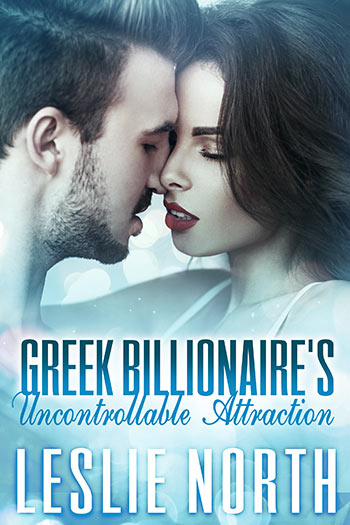 18-year-old Greek banking heiress Eva Rosso has her heart set on attending college in the US, but she’s struggling to even pass the entrance exam. When her brother hires cocky American Callum Woods as her tutor, Eva wants him gone.

She’s sick of being treated like the baby of the family, and besides, she’s too distracted by his golden skin and lean muscles to study. There’s only one way to get rid of him, and she’ll have to use all her charms to do it.

Callum has always wanted to teach, although a spoiled rich girl isn’t his top choice as a first student. But with no money to return to the States, he’ll take what he can get. Her dark hair, gorgeous body, and constant flirting are becoming a distraction though, and he’s having a hard time staying focused on the job. But his student is untouchable, and to earn his pay it’ll take everything he has to resist temptation.

Their attraction is becoming uncontrollable, but what future could there be for a young American teacher and his wealthy Greek student?

Callum Woods swallowed convulsively several times before he found his voice. It hadn’t been on his schedule to see Eva Rosso this early.
And, dammit, he liked schedules. Order, routine, plans—all of that kept his life in order. That wasn’t something he’d had much of growing up, and these days he clung to his timetables as if they were all he had. Sometimes he felt like that was the case. But right now he had Eva swimming in the pool in something barely there.
He tried not to stare at her breasts—or the scraps of fabric covering those perfect mounds. Clutching his towel, he asked, “What are you doing out here so early?”
Eva smiled. “I thought I’d join you today. That is okay, isn’t it? I mean, I do live here.”
Callum nodded. His mouth dried and his pulse kept hammering. He wanted to turn around and walk away as fast as he could, but that was a coward’s way out. And this was her home, and therefore her pool. If she wanted to swim in it, who was he to tell her she couldn’t. “I can come back later.”
“But I wanted to swim with you. I hate to swim alone. You know, it’s all too easy to drown.” She batted her eyes at him and pushed her bottom lip out in what looked like to him a mock pout. He was willing to bet she’d been practicing that look.
Pretty sure she was playing him, he dropped his towel and headed toward the deep end. He dove in and started a lap. He’d gotten three laps in when the feeling of being watched sent a shiver down his back. He stopped and turned.
Eva sat on the edge of the pool, watching him. “You know, I could watch you all day.”
Face hot, he turned and dove into another lap. Maybe if I swim until I can’t feel my arms, I can get out of the water without embarrassing myself. His body had tightened and while he liked baggy swim shorts, there was no way he could exit the water with a boner.
He swam another ten laps and paused to catch his breath at the far end of the pool. Turning, he asked, “Are you cooking breakfast or am I?”
Eva lifted her head and laughed. “Silly. We have tons of servants. Breakfast should be out soon. In fact, why don’t I go inside and get you coffee while you finish your swim.”
Callum stared at her. “Tons. Servants. Of course.” For a minute he’d forgotten she was little Miss Rich Girl. He gave a nod.
Eva’s smile faded a little. She tried to shore it up, but she stood and headed inside. He watched that tight little ass of hers as it disappeared. He cursed softly under his breath. The way that suit barely covered her body had his mind conjuring up all sorts of things they could be doing instead of lessons.
But he had to keep a focus here. He needed the cash, the ticket home—and he did not need a rich girl using him for a toy. He pulled himself from the pool and started to plan a lesson that would occupy her brain for the day—and hopefully bite down on the attraction that kept boiling up between him and his student.