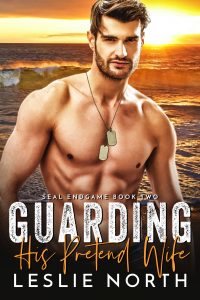 Eric Harvey is the perfect man to play journalist Beth William’s fake husband—he’s a guy and he’s willing. Beth is on the cusp of breaking a huge story about an exclusive couples-only retreat when her partner becomes ill. In walks Eric, her brother’s buddy, and a brilliant idea strikes her. This Navy SEAL, on leave nursing an injury, could step in and pose as her husband while she tries to uncover what’s really happening at the retreat. With their story set, the two head to the tropical island, ready to do their job. It’s all business—until it isn’t. Beth hadn’t realized how difficult it was going to be pretending to be in love while not actually falling in love with this sexy man. As the two get closer to finding the truth about the resort, Beth finds herself getting unexpectedly closer to Eric. Something that wasn’t in the plan at all.

Eric agreed to Beth’s plan out of pure boredom. Why not spend some time on a tropical island with a beautiful girl, even if his buddy’s sister is completely off limits? But it doesn’t take long before he realizes something is seriously wrong with this paradise. Someone seems to be out to hurt Beth, kicking Eric’s protective instincts into high gear. Now he’s keeping Beth close for her safety even as his head warns him to keep his distance. Sure, there’s danger on the island, but the most dangerous thing may be the way his body and his heart is responding to Beth.

Guarding His Pretend SEAL is available on: