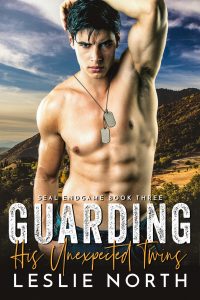 Former Navy SEAL Gage Winters is surprised to suddenly have custody of adorable twins after a childhood friend and his wife are killed. Adjusting to life as a new father is hard enough, but when the babies’ gorgeous aunt, Kylie Fredericks, shows up at his doorstep, determined to play a role in the babies’ lives, Gage can’t help but accept her help—at least for now. A loner by nature, Gage isn’t completely happy about sharing his home, even if his new roommate is sexy, single, and a natural around babies. But he’s admittedly in way over his head and while he’s wary of Kylie, he can’t deny how nice it is to have her around. And not just for the babies.

Initially Kylie can’t see why her sister chose Gage as the twin’s guardian, but the longer she stays, the more she realizes that not only is Gage a good father, he’s also a good man. Not to mention pretty easy on the eyes. But Gage has one fatal flaw: he wants more children…and that’s something Kylie can never give him. Though they’re becoming a cozy family, Kylie has to remind herself that she and Gage have no future together.

When Kylie and the twins are attacked in a park, Gage’s protective instincts go into high gear. Keeping the babies and Kylie safe becomes his number one priority. Too bad he didn’t think about protecting his heart. With an unknown threat circling closer by the minute, Gage and Kylie will do whatever they can to keep the babies safe—even if it means risking their own lives and sacrificing the love their hearts are having an increasingly hard time denying.

Pick up Guarding His Unexpected Twins on: