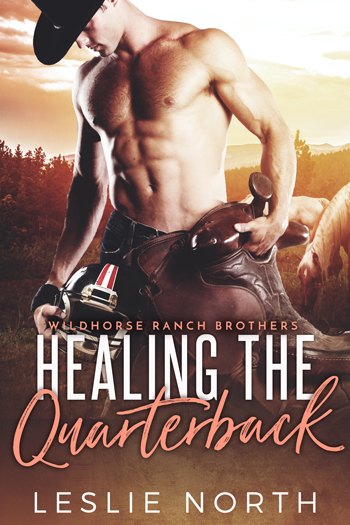 “Wow! That was great, amazing and fun! The chemistry is jumping off the pages. I love how she was so strong and powerful and new how and when to use her beauty. I also loved how she tried to fight and maintain control…Loved everything!”

Charlie Wild knows how to make plays on and off the field, and he is used to always getting a touch-down.

He is wildly handsome,

but a terrible patient…

Charlie can’t stop trying to get his gorgeous female doctor (Dr Rose) to pay attention to other parts of his tantalising body… the bits that, I know for a fact, aren’t broken… they maybe dizzyingly rock-hard bits, but they sure aren’t broken!!

Charlie Wild knows how to score. On and off the field he’s been a force to be reckoned with since his father taught him how to throw a spiral in the back pasture of Wildhorse Ranch. But a recent injury calls into question his ability to play football and points a finger at his wild child reputation. He’s been given an ultimatum: overhaul his image by renovating his hometown hospital or get off the field.

The last thing Dr. Dylan Rose needs is yet another man telling her what to do and certainly not what to do with her hospital. She’d left Houston and the sports stars she’d fixed there, tired of watching big bulky men beat each other up for fun. So when Charlie Wild limps into her hospital she wants nothing more than to fix his hot body up and see that great ass walk out the door.

Charlie is taken by the sexy doctor. Her sweet smile hides a sharp tongue that he enjoys baiting just about as much as he loves kissing it. He’s on board for following her prescriptions and more than willing to teach her new ways to score in the sheets. But when it comes to the final seconds of this play he’s going to have to decide what is more important: The doctor he’s learned to love, or the game he just can’t quit…

When it all became too much for her, Dylan mounted the steps to the upper deck of the stadium. She would get some exercise walking laps at a higher altitude and escape the crowd for a bit, before heading back down to her own seat in time for kickoff in an hour.

She had not figured on getting knocked on her ass by a freight train.

It had to be some form of locomotive that hit her and sent her ten-dollar popcorn flying out of her hands. Nothing else could account for the power, the sheer force, responsible for the collision. It knocked the air out of her lungs, the sunglasses off her face, the indignation off her tongue; Dylan rebounded off the obstacle, arms pinwheeling, until someone reached out and caught her.

The train had a hand. He had a face.

God, did he have a face.

The man gazed down his nose at her, surprised but not in the slightest bit upset by their encounter. The man towering over her had a strong jaw, cocked slightly off-center in a rueful smile. His eyes were a wintery blue, and his blond hair hung down past his incongruous square chin.

They both offered their stumbling apologies at once. The man held up a finger, and Dylan clicked her mouth shut. Wait a minute—had he really just signaled her like she was a dog? But he stooped down in front of her like Cinderella’s prince to pick up her sunglasses, and she decided to let it slide. Speaking of letting things slide, it was all too easy to imagine from this angle how her hands might arc down those incredible shoulders of his…

It hit her like the first kickoff of the season. They had never met before, but this man was all too familiar. Dylan knew he was famous before she could put a name to his face, to his body. He was football stock, but he wasn’t just any ordinary player.

Charlie Wild, starting quarterback of the Texas Teamsters, straightened and brushed the popcorn kernels off her glasses before passing them back to her.

The way his eyes lingered on her…he must have some imagination hidden away in that impenetrable head of his, Dylan mused. He may dote on her like Cinderella, but she was definitely the sans-ball gown Cindy. Today she had dressed herself in a white slouchy tee, a corner of which she tucked into the front of her jeans to give the casual viewer at least some evidence of her trim stomach. A baseball cap pulled low over her eyes completed the lazy, figure-swallowing ensemble.

It amused her to watch the behemoth lean in again, conspicuously this time, to try for a good glimpse of her face beneath the hat. Now that she knew who he was, she also knew his specs. Charlie Wild: six-foot-six, two hundred eighty pounds, thirty years old. He hadn’t just trained himself to peak physical perfection, he had invented it. In all her time pursuing a degree in sports medicine, Dylan had never been faced with a specimen like him. He looked like he had descended from Valhalla to play starting quarterback for the Texas Teamsters.

And she looked like a mortal mess. For once, Dylan actually regretted dressing down for one of these games, but it didn’t appear her efforts—or lack thereof—dissuaded Charlie Wild from getting an eyeful. Dylan lifted the brim of her hat a little to gaze back at him defiantly. If he was used to women shrinking beneath him or melting into panty-twisted puddles of goo and thought she would do the same, he had another thing coming.

“You look like you’re incognito.” His voice boomed in his chest like a summer storm, like a packed stadium rumbling with applause. “You in some kind of trouble?”

What a line! Amusement tugged at the corners of Dylan’s mouth despite herself. “Something tells me I might be,” she confessed.

Find out what happens to Dylan in Healing the Quarterback. It’s available at…