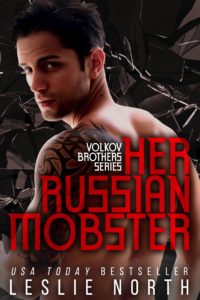 Sometimes love thrives, even in the most dangerous situations…

Fashion boutique owner Allison Charman isn’t surprised to learn her brother is in deep debt to the Russian mob. What she’s not prepared for is the man who comes to collect. Mob enforcer Kaz is massively tall with scarred, tattooed skin, but Allie refuses to be intimidated. She offers her store as payment, but Kaz has already set his sights on her. It doesn’t take long for her to be seduced, but when Kaz offers to personally pay off the loan, Allie won’t be bought. She may have fallen under the Russian’s spell, but she’ll take care of her family on her own terms.

Allie’s life is at stake, and Kaz doesn’t want anymore blood on his hands. With danger at every turn, will Kaz and Allie recognize that their connection is more than just skin deep in time to save them?

Her Russian Mobster is available from: