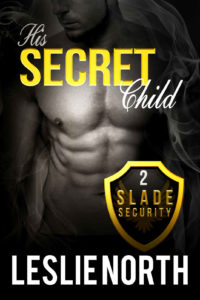 Slade’s priorities are his job and his security team. He’s never been interested in a picket fence, or answering to the same woman for the rest of his life. Those are attachments he doesn’t need. But when he goes to check on the boy left behind by the death of his employee’s ex-wife, Slade isn’t expecting to find Bethany Simmons. The computer programmer is smart as a whip and classically beautiful, and Slade can’t help but to take notice.

When Bethany contacted Slade Security to let them know of her sister’s death, she never thought it would be Slade himself who would show up. The hulking mass of hotness, with his tanned skin and gray-streaked hair, instantly makes her insides melt. Despite her attraction, though, Bethany worries that he’s come to take away her nephew—and she’s not going to let that happen.

It’s in Slade’s nature to protect people; but when the ex-Navy SEAL barges into Bethany’s life, she doesn’t know how to handle him. She’s used to settling her own affairs and her priority is finding a way to adopt little Jason. But soon, a secret could change everything for both them…

His Secret Child is available from:

The Slade Security series is also available as a boxed set from Amazon, GooglePlay, iBooks, Nook and Kobo.