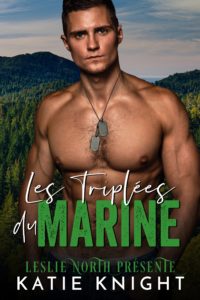 Cora Caspian has nursed three adorable triplets since birth. But when their parents die in a tragic fire, she is more than disturbed to discover that their will makes a very special ex-Marine their legal guardian by her side. So, she will have to take care of the girls, make sure they are happy and healthy, while William Royce will protect them. Among all the employees of his security company, however, William seems to him to be the last to know how to take care of three small children. He, the alpha male with bulging muscles and military determination, is absolutely not what girls need. Let alone what Cora needs, despite being the most stunning man she has ever seen. Having grown up in the army herself, she knows what it’s like to live with a man like William, who puts his duty before his family. But Cora is very quickly surprised to discover that William has in fact nothing to do with his father. He takes his job seriously, and against all odds, he’s also very considerate of girls. And it is the same with Cora when they find themselves alone together …

As an orphan who has no idea what family life is like, becoming a tutor to three little girls is arguably William’s worst nightmare. Worse still: she has to live with their breathtaking converted nanny, mom, who made sure to make her understand that she did not think he was up to this mission. But when the threat to the triplets becomes clearer, William’s protective instinct is tickled. Cora also arouses deep emotions in him that he cannot ignore. Suddenly, the thought of being part of a family doesn’t seem so horrible to her anymore. After all, maybe that’s what this lone wolf needs, even if it’s only going to be temporary?

But as the danger to the triplets grows, William realizes that his emotions are preventing him from doing his duty properly. To protect the triplets, he will have to erect a barrier between himself and his new family, although the loss of Cora and the girls may destroy him.