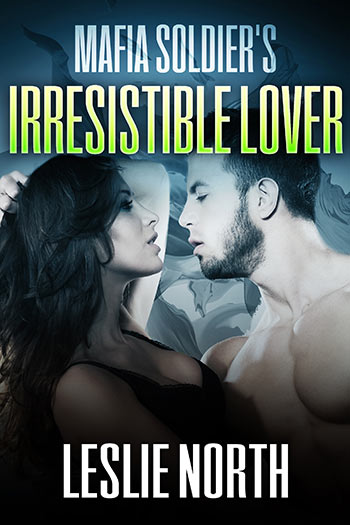 Chelsea thought she left her dark past behind long ago, but when danger reappears, a Russian mafia soldier becomes her unexpected protector.

All 25-year-old Chelsea Barlow wants is a quiet life with the little girl she’s been helping to raise for ten years. She definitely doesn’t need the diversion of the deliciously dangerous stranger who appears at her doorstep. She should be frightened by his powerful bulk, towering height and tattooed knuckles, but instead his good looks and quiet strength call to something deep inside her.

Loyal mafia soldier Valentin Tolstov’s mission is clear: find the young girl who’s being targeted by a ruthless rival mafia boss. However, finding her in the care of beautiful and curvaceous Chelsea Barlow is a complication he didn’t anticipate. While he’s drawn like never before to the woman’s fighting spirit and auburn curls, he’ll have to resist temptation to stay focused on his job.

With old and new threats emerging from different directions, it will take everything in Val’s power to keep Chelsea and little Darya safe. Falling in love is a distraction they can’t afford.

“She’s a lovely young girl.”
Chelsea startled at the deep, masculine voice from behind her. Heart thudding hard, she turned fast and almost stumbled. He caught her in his arms.
Chelsea gulped. The man was easily six feet six, with broad shoulders and strong hands that held her tight. Cool blue eyes stared at her. His dark hair, cut almost in a military style, ruffled slightly in the evening breeze. Beneath his coat collar she could see the faint edges of more than one tattoo. Chelsea’s breath caught in her lungs. She’d found herself unable to break eye contact
Then Darya tugged on Chelsea’s coat. “Mom, do we have a guest? Hey, mister.”
Mouth dry, Chelsea pulled herself together and out of his arms, but her skin still tingled.
A five o’clock shadow made him look dangerous and sexy at the same time. Who was this guy?
She put an arm over Darya’s shoulder, but the guy crouched down so he was on Darya’s eye level. “I’m Val.”
“Val—that’s a girl’s name.”
“No, it’s my name. Like St. Valentine. Only I spell my name without an ‘e’ on the end.”
Darya giggled.
“I didn’t mean to startle you.” He rose and held out a hand. “Valentin Tolstov. I called about staying at your bed and breakfast.”
Chelsea forced herself to find an easy smile. “Of course. We don’t get many visitors to Clear Springs this time of year. Tourists like the summer fishing and hike, and we get a few hunters in fall, but once the snow starts, it seems like everyone wants the ski lifts.” She knew she was babbling, but she couldn’t help it.
She hadn’t rented a room in far too long—the savings account was getting slim, and the costs to adopt Darya had been higher than she’d thought. This guy was going to help save her butt. And boy was that a nice butt. She admired it as he turned to get his bag. And she told herself, ‘down, girl.’ She had enough going on with Darya and the adoption, and fixing up her bed and breakfast.
The man—Valentin Tolstov—waved a hand at the wood on the deck. “Do you need help bringing this in?”
“How about we get you settled?”
He opened the door for her, giving her a sexy smile that made her breath catch again. Chelsea herded Darya inside, who was still chattering, asking Valentin questions.
“Call me Val,” he told her.
Darya grinned again. “You can call me Dar—I’m trying to get my mom to call me that, but she thinks it’s dumb.” Darya rolled her eyes.
Patting her on the back, Chelsea headed Darya upstairs. “Bath, Ms Dar. And homework done before you can watch any shows.”
With a groan Darya ran up the stairs.
Val turned and smiled at her. “Nice kid.”
Chelsea headed to the desk she kept in the parlor and handed over the register. “She’s ten going on forty if she had her way.”
“Does she take after her father more?”
A lump rose in Chelsea’s throat. She got it anytime someone remarked on the differences between her and Darya—she was fair skined, her hair a reddish brown, while Darya looked exotic with her black hair and olive skin. Chelsea sighed. Darya looked like her mother–like Alexandra.
“I’m adopting—Darya’s mom was a friend.” A really good friend. “I’m not—Alexandra never mentioned Darya’s dad. And…well, the state’s been unable to give me much information on him.” Babbling again. She bit her lower lip. She was not going to talk about the money that had been showing up even after Alexandra’s death—month that had stopped just as mysteriously as it had begun. She’d refused to touch it, but she was keeping it set aside. Darya might need it for college someday. She offered up the guest book, and Val signed it.
He had nice handwriting—strong just like the rest of him.
She frowned at herself.
She did not need a man in her life—no way. Not now. And she also did not need a mysterious guy with a sexy hint of an accent. Maybe once the adoption was done and Darya stopped having nightmare and the B&B was paying its bills. She let out a breath—who was she kidding. She had enough on her plate for the next twenty years.
“I’ll show you to your room.”
Val smiled and just opened the door for her, using his shoulder to hold it open so she could enter ahead of him.
The close quarters of the doorway didn’t allow much extra room, and as Chelsea slipped past him, she twisted her body, accidentally brushing up against all that hot muscle she’d just been trying so hard not to talk or think about.
—–
Links