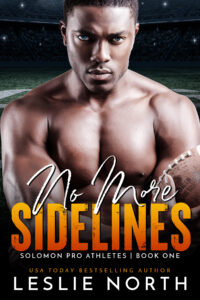 Star quarterback Marcus Kingston lives and breathes football… Until an injury on the field nearly ends his career. When his coaches want him to wear biofeedback technology to analyze his game, Marcus thinks the idea is ridiculous. Plus, the mousy scientist behind the project knows nothing about sports. But with another Quarterback waiting on the sidelines, Marcus can either agree to participate, or get benched—permanently.

Scientist Clare Wynifred has zero interest in sports. She never imagined her wearable tech being used to improve a silly game, but its success with the team could get her a military contract. And she knows her a breakthrough like that could save the lives of countless soldiers… Soldiers like her bother, who was injured in the line of duty. She just has to work with this stubborn quarterback, and she’ll be one step closer to her goal.

Marcus and Clare butt heads at first, but their mutual attraction quickly heats up the field. Still, with everything on the line, will their romance have what it takes to go the distance?

No More Sideslines is available from: