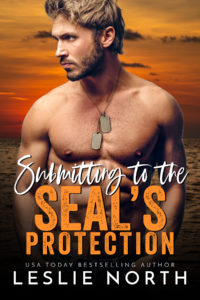 Owned by the Navy SEAL has been republished as Submitting to the SEAL.

A Navy SEAL stole her heart. Now he must fight to protect it…

For Rita, life was just one boring date after another. No passion. No sparks. No sizzle… Until she spotted Jared across the room. A tall, muscular, tattooed Navy SEAL—Jared was impossible to ignore. The second they locked eyes, she knew… It was more than lust, more than infatuation. She belonged to him…

At first, she resisted. Maybe she should go for someone more normal. A nice guy with a 9-5 job and a pension. Someone safer. But there was no fighting the attraction that drew her to him. And the more time they spend together, the stronger their bond grows.

But when Rita’s ex-husband Tucker finds out she has a new man in her life, he returns with a vengeance and kidnaps her. As a former Navy SEAL, Jared is as tough as they come. But can he get to Rita before Tucker sails off into international waters, beyond the reach of the law?

Will Jared be able to protect his new love, before it’s too late?