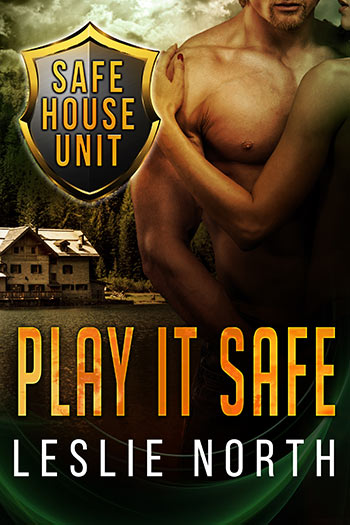 Ex-Navy SEAL Samson Caine has lost everything he’s ever fought for – and nothing can bring back his wife. But when he’s offered a new mission protecting brilliant, sharp-tongued biochemist Angela McAllister from those who want to exploit the deadly knowledge she carries, he’s got no choice but to accept. He couldn’t save his first love, but maybe he can finally find redemption keeping the fiery scientist safe.

Samson knows he has a difficult road ahead of him, but he doesn’t count on the asset he’s charged with protecting being so . . . intriguing. Falling in love isn’t part of the plan. Especially when a rogue government official with nothing to lose plans to harness a lethal bioweapon and take revenge on the terrorists hiding out in Samson’s South African village with Angela’s help—and holds her brother as leverage.

Now, it’s up to Samson to protect a town full of innocents, one of whom is the son he hopes to adopt, while keeping the woman he loves from harm. He’ll have to fight powerful enemies, and his own demons, to save his world from catastrophe.

Desperation of southern California patrons to land somewhere trendy, to see and be seen in a place so over-the-top British, the Queen mum herself would have declared it a patriotic disgrace. Desperation of single men to drink themselves into pints of courage and women to pretend they hadn’t come for a one-night roger. And desperation in the form of one out-of-place woman who looked as if she might have swallowed fire.

And preferred that particular torture to liquor, country or sex.

He approached the escort his boss, Rockwell, hired. Jon was soft, just out of training, all book knowledge, little else. Guy’s back was to the bar’s street entrance. That made two mistakes in the span of time it took Samson to estimate the pub’s capacity—hundred and twenty—determine the number and strengths and weaknesses of all exits—four if the ladder in the alley was a reliable indicator of a roof hatch—and size up the woman assigned his protection—a five-foot-five, buck-nothing pound, card-wielding Mensa member afraid of her own shadow.

Samson’s assignment couldn’t have read more keep-it-in-your-pants had Doctor McAllister worn a nun’s habit and fiddled with rosary beads instead of the pearl button on her matronly sweater. Just once, Samson wished his reputation for getting laid didn’t factor into Rockwell’s assignment matches. He had never compromised someone under his protection.

His gaze trickled past the knee hem of his ward’s Von Trapp dress to her white tights and Velcro-fastened loafers.

Nope. No danger this time, either.

Samson clenched Jon’s trapezius muscle, a firm enough squeeze that he would definitely reconsider ever exposing his back to the street again, not firm enough to cut off blood supply.

Jon stood, raised the opposite arm and twisted toward the grip, effectively sliding out of the maneuver. His closed fist stopped short of striking Samson’s temple.

“Impressive for a surfer boy, Bon Jon,” said Samson. “First defense is your brain. Corner booth would have been a better choice.”

“A dick who’s training will keep you alive, nonetheless.” Samson glanced at the bar glass that had tipped over in their scuffle: clear liquid, no fizz, lemon and lime wedge. Water meant to look like gin. “Good work, man. I got this.”

Jon stood, skirted the bar corner and whispered something in Angela McAllister’s ear.

Her dusky, copper eyes collided with Samson’s stare. She blinked twice as if she were trying to clear a sudden fog that had descended. Subjects often didn’t see hand-offs coming. Safer that way.

The whisper continued. Too damned long, though Samson couldn’t guess why it should bother him. Bon Jon was probably telling her how very much he enjoyed her diatribe on the history of wind instruments or knitting scarves. Samson tapped him on the elbow, effectively dismissing him. With a final splay of his hands to Angela, some sort of covert wave, Jon exited the pub.

“What was that about?” Though Samson couldn’t guess why he wanted to know.

“Standard protocol. You should feel safe with every contact on Rockwell’s payroll.”

“Jon’s still a tadpole.” At her quizzical expression, a pinch that centered around her pert, button nose, Samuel added, “In training.”

“Your best bet at reaching the age where those shoes are fashionable again.”

“Chemical residue on my lab floor eats away at the soles. They’re practical.”

“Spoken like a fashion-forward man who made the clichéd choice of barbed wire ink around his bicep.”

A smile scratched its way up through Samson’s chest and itched to squirm free of his lips. Maybe protecting Our Lady of the Chemical Weapon wouldn’t be so dull after all.

“If you can tear your eyes away from my bicep long enough to focus, I want you to find the hallway hidden behind the bar back, tan brick wall. That’s our extraction point.”

“Does this macho-ego thing you have going play well with all your women or just the women with a noble, monotomic gas between their ears?”

“They all scream the same, Madame Curie.”

Her laboratory-pale features turned slow-boil pink. On any other woman, the flush would look like makeup or the localized cheek swell after orgasm, but on the very ordinary, very plain woman before him, the effect covered her from hairline to chin and bloomed feverish and hypnotizing. He liked having learned how to disarm her dry sarcasm so quickly. For the repressed, most-likely virginal, woman before him, it was sex.

Regarding that topic, there was no end to his arsenal.

“We move when Flogging Molly kicks in.”

Again with the strained expression.

“Irish? Punk? The music? Nevermind. My silver Spyder is waiting in the alley.” He thought maybe he should amend his statement, like the non-arachnid kind because she probably drove a VW bus, but she surprised him.

Damn. Samson felt like a caveman unworthy of her cave. The crowd grew raucous at the sudden lively tune. Perfect time to depart. “Ready?”

The cell phone beside her lit up and inched across the dark mahogany bar.

Angela reached for the phone.

“Don’t answer that.” Samson’s hand clenched hers, effectively freezing out her free will. His free will, however, froze the moment her petite, warm hand filled his. He wasn’t sure what he expected. Frigid. Unyielding, maybe.

She protested—something about a team and work—but he couldn’t make it out over the noise crowding his ears. In seconds, she had slipped off her barstool and headed toward the vacant, candy apple-red British phone box near the restroom, cell to her ear.