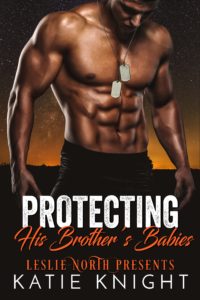 Lake Bailey loves her job working for the Shepperton Foundation, which is why she’s so upset when she suspects someone is funneling money from it. When her boss, Devon Shepperton, who she was casually dating and who she suspects might have been involved in the shady dealings, ends up dead, Lake worries someone is trying to kill her too. Complicating matters, she finds out she’s pregnant with Devon’s baby. So when Devon’s Navy SEAL twin, Drake, shows up to settle his late brother’s estate, she reaches out for help. Drake generously offers to keep her safe in his highly secure condo until danger passes. As the two spend more time together, Lake soon realizes keeping her heart intact might be her biggest challenge.

Drake knows he’s returning to his SEAL team, so getting romantically entangled with Lake is definitely off the table. His role is protector, not lover. Then comes The Kiss. Drake has kissed plenty of women, but for some reason, that one kiss from Lake is throwing him off his game, making him feel things he’s never felt. But he needs to stay focused. The danger to Lake is very real, and he strongly suspects the Shepperton Foundation is at the heart of it. As the danger swirling around them becomes a tempest, Drake finds himself drawn closer to Lake, realizing he’ll do just about anything to keep her safe. And to win her heart…

Protecting His Brother’s Babies is available from: