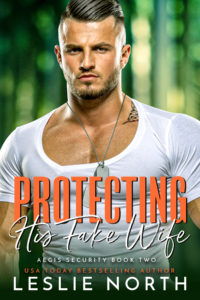 Charlotte Burnside’s safe, comfortable world is forever changed after she and her two besties witness a mob murder. Now, the only way out is to go into hiding with a former Navy SEAL who terrifies her almost as much as the bad guys. Easton Yates is just so big, so tough, so…distractingly attractive. Posing as newlyweds, the two head to Florida for their “honeymoon.” The boundaries for their fake marriage are clear: Act like a couple in public, but in the privacy of their hotel room, it’s all business. However, it isn’t long before the lines between fake and real begin to blur, and Charlotte finds herself falling for the big guy. But Easton lives in a dangerous world that frightens Charlotte to her core. A world she’s not sure she can be part of…

Easton has never acted on an attraction to any client, but there’s just something about Charlotte that’s threatening to break the promise he made to himself to keep things strictly professional. The woman he thought was completely vulnerable turns out to be tougher than he expected—and far more difficult to resist than he could have imagined. Keeping Charlotte safe is his main concern, but keeping her happy starts to overtake his priorities. He decides he needs her in his life—forever. But with danger swirling all around them, can he convince Charlotte that life with him is what she needs most?

Protecting His Fake Wife from: