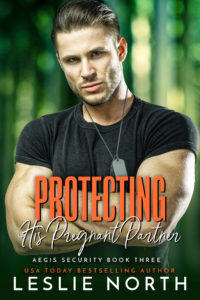 Holly Yee’s life is shattered when she witnesses the murder of her ex, forcing her into hiding from mobsters who want her eliminated. Pregnant and now under the protection of bodyguard and former Navy SEAL Kenton Price, she’s going a little stir crazy in his apartment. Holly’s always been a woman of action and sitting on the sidelines while the investigation takes place really isn’t her thing. Former jocks aren’t really her thing either, but there’s something about Ken that is different from the other men she’s known. Something hot. And sexy. And…special. Most of all, she feels safe—until the mob targets Ken, putting both their lives in danger.

Despite the threat to himself, Ken’s priority is protecting Holly and her unborn baby. In a short time, she’s become important to him. Too important. His professional resolve to not become involved with a client is testing him in a big way. Holly is as smart as she is gorgeous and he can’t stop himself from being attracted to her. That’s as far as it can go. She’s going to be a mom and one thing he won’t do is break a little kid’s heart when their relationship ultimately ends. He learned that hard lesson as a kid. Despite his resolve to keep his distance, ultimately he can’t resist her. He tells himself—and her—it’s just a fling. Too bad his heart isn’t listening…