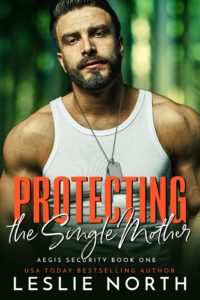 So when his ex hires his security firm to keep her and her friends safe after they witness a murder, he convinces himself he’ll be fine. Single mom Nicole Zito may have been the love of his life, but he’s confident his second chance rule will keep him and his heart perfectly safe. But he can’t deny his protective instincts when Nicole shows him the threatening email she received that disturbingly included a picture of her young son, Grant.

They both agree to keep things on a professional level. But protecting Nicole means being with her, and being with her and ignoring his heart is turning out to be a lot tougher than he thought.

Even though Nicole still has feelings for Michael, she knows he’s the best man for the job. No one is more focused than he is. No one is better at shutting down his emotions. One thing she never expected, though, was how perfect it would feel to be with him again, tucked away in a quiet cabin with him and her son…almost like a real family.

It’s everything she wants, but she doesn’t know if it’s something she can have. If they ever get rid of the danger chasing her, will their fragile new bond come to an end, too? She’s falling fast for her sexy SEAL, all she has to do is convince him their love is worth a second chance…

Protecting the Single Mother is from: