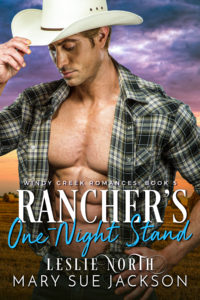 Love was never part of the plan…

In beautiful Windy Creek, being a Townsend means something. It’s a legacy that rancher Michael Townsend feels obligated to honor. His decisions reflect on his character—and how the people of Windy Creek vote come election time. And sleeping with Jenna Griffin, his political campaign manager, was definitely the wrong decision. That’s why their one-night stand is going to remain just that… No matter how much she drives him to distraction.

But while Michael is committed to his campaign promises, his promise to keep things between him and Jenna all business is going to be a lot tougher to keep. Especially when she drops a bombshell in his lap.

Having a baby was never part of Jenna’s plans, but now it’s become her reality. And so is the fact that she’s falling for Michael, even though she really doesn’t want to. Right now, all her focus has to be on her career, getting the infuriatingly handsome cowboy elected—and the baby, of course.

Rancher’s One-Night Stand is available from: