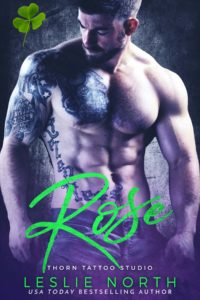 “Holy smokes Batman, this book was HOT, HOT, HOT!!!!!!!!!!!!!
…The chemistry between Gio and Riley is off the charts! … OMG! So hot! I loved this book, everything the setting, the dialogue, the conflict. Perfect!”

In my hot new series, we’re taking a trip to Las Vegas! I have three rough and seriously enticing bad-boys for you to meet, Gio, Antonio and Luciano DeRose.

for knowing how to please the human body,

and generally just being delicious eye-candy!

If you like a stud that knows a woman’s body is a canvas, you’ll love this! Go ahead and grab Rose at:

Thorn Tattoo Studio is available as a boxset on Amazon, iBooks, GooglePlay, Nook and Kobo.

Giovanni DeRose only came back to Las Vegas to work with his brothers in the legendary family tattoo studio. Instead, he’s found himself the leader of a sinking ship, thrown together with a gorgeous woman who won’t back down. But with the threat of closure if he doesn’t turn a profit ASAP, working alongside her may be his only option. Gio can do just about anything with his talented hands and bare skin, but this bad boy will need something different if he’s going to save Thorn…

Riley Bryne is an Irish lass that’s as smooth as whiskey—if you don’t mind the burn that comes along with it. As Thorn’s new co-manager she’s desperate to pull it back into the green to clear her own debt, but her numbers-focused tactics throws her up against her Gio’s art-centered direction. Challenging the tattooed hunk is easy, but stopping herself falling for his smouldering touch? The odds don’t look good.

Riley is business savvy and a little bit bossy—something Giovanni finds frustrating in the studio and hot as hell when he’s got her pinned to their office desk. But if Thorn Tattoo is going to survive they’ll need to combine not just their bodies, but their talents outside the bedroom, too.

Giovanni dug into his pocket and held out a handful of change. His mind sizzled with rage, and he knew that the guy he was facing down wasn’t any cooler.

The insults worked. The man spat at him, but the lob was poorly aimed, landing on the shop floor.

The man seethed, “So fucking full of yourself, aren’t you?”

“Least I can aim,” Giovanni shot back. “Now, get the fuck out and don’t come back. I swear, if you come in here and cause any trouble again, I’ll drag your ass out.”

There were no more words exchanged between them. The man spun on his heels and stomped up the stairs. The front door opened, and the bell above it jingled. Then it slammed shut making the glass panes shudder and the door creak in complaint. Giovanni put the change back in his pocket, dusting his hands on the sides of his pants, and then turned to face the woman standing behind him.

She scowled at him.

“What do you mean, really?” Giovanni crossed his arms over his chest and lifted his chin. Anger still corkscrewed beneath his skin making it difficult to pull himself together. Something about seeing her, redirected his rage and funneled it into something wilder and far more primal.

She looked really fucking hot when she was angry.

“That,” the woman waved at the stairs, “is what you consider management?”

“I got him to shut up and leave, didn’t I?” Giovanni hitched an eyebrow and leaned toward her, looking to intimidate. She had curves in all the right places, but she wasn’t a physically imposing woman. Her tiny frame was matched by her height, and she wore gorgeous strapped heels to compensate. If he wanted to, he figured he could lift her with one arm. “What did you think you were going to do to him? Flash him a cute smile, bat your eyelashes and ask him to kindly reconsider smashing in all of our glass display cases?”

“No.” She crossed her arms over her chest. “I would have talked him out of his anger like any proficient manager and then worked through his issue alongside him. If you yell your problems away, Thorn Tattoo is going to sink. You need to get your act together, or this business isn’t going to be a business for much longer. Reputation and talent are a shop’s most important draws, and if word gets around that you’re doing this to clients….”

“Then what?” Giovanni drew back. It looked like she wasn’t going to be intimidated, and he had to respect her for that. She didn’t look like a shop babe, and she definitely didn’t sound like one, but there was a steely quality to her personality that let her stand on her own. She was resilient. “Then we get a reputation as a shop that doesn’t take shit.”

“You get a reputation as a shop that’s hostile toward customers,” she replied. “If customers hear that, then they’ll go elsewhere. Thorn Tattoo isn’t the only tattoo parlor on the strip, you know. There are tons of fantastic artists in the area with more arriving all the time. If our reputation is tarnished, we’ve lost that edge and our business is going to go elsewhere.”

We? Our? The more she talked, the more it sounded like she was part of the team. Giovanni had no clue who she was, and as the manager, he was the one who hired. He knew for a fact he’d remember a stunning face like hers; especially with a mouth like she had.

“And who are you to boss me around like that?” he asked. “I didn’t hire you.”

“I would hope not.” She lifted her chin, her full lips set. They were shaded a dark pink that flattered her features and made that wild thing inside of him even wilder. They were the kind of lips Giovanni wanted to kiss until his jaw was sore. “My name is Riley Byrne. Antonio DeRose hired me to work as co-manager of the shop alongside someone named Giovanni. Am I to take it that man is you?”

No, he fucking didn’t. Giovanni’s head shot toward the back office as if Antonio would magically appear there, smirking at him. His brother was the stiff, no-nonsense businessman whose head was focused on numbers. What the hell was he doing bringing in a chick who looked like an ink virgin, who had no visible piercings apart from her lobes, and who likely couldn’t tell a tattoo machine from a power supply?

“Antonio told me I’d be starting today,” she said. “He said you’d be made aware. I take it you haven’t checked your emails?”

Giovanni wasn’t going to take treatment like this. He’d been begging Antonio for the funds to hire new artists for months now. They’d stretched the budget to bring on Mal, cutting corners with the funds already available so they could have an extra set of hands on deck, and now Antonio was hiring management who had no business in the tattoo bays.

It boiled his blood.

He stormed past Riley toward the back office. The click of Riley’s heels followed him at a short distance.

Giovanni didn’t take orders from anyone, and he wasn’t about to let some fresh face tell him how to run the shop. Antonio was going to answer for this. There was no way Riley was going to last if Giovanni had something to say about it. Whatever salary she was being paid could fund another artist to bring in more revenue.

“You need to stop,” Riley said coldly. She grabbed his arm as he walked, and the urge to snap her in half flashed through Giovanni and almost overwhelmed him. It stopped when her hand tightened and she yanked him around so they were face to face.

He was surprised. Riley was tiny and feminine, but she was strong.

“The two of us are going to be working together now,” she said, keeping her words low and even. “I’m here to help you, and just like you have boundaries, so do I. Before you go into that office to call Antonio to bitch about me, you need to know them. First, don’t ever think you can storm away from hard conversations. We’re adults and we need to respect each other and listen to what the other has to say, especially because the success of this shop is depending on us. Second—” her eyes flashed, and Giovanni’s cock pulsed in response. He wanted to pin her to the wall and kiss her senseless, make her his. “—and this is the most important thing… in the future, I am more than capable of taking care of myself. I’d appreciate it if you never got between me and a client again.”