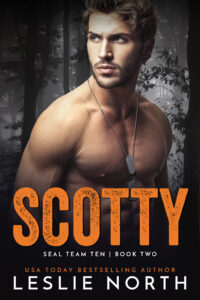 Navy SEAL Scotty Devonshire has one weakness: women. But a long-term relationship? That’s not his style—until Hayley Stevens walks into his life. All he wants is to find his SEAL teammate’s widow and clear his buddies’ names. Turns out Hayley, a hacker extraordinaire, is trying to find the same woman. Hayley’s smart, cute, and more fascinating than any woman Scotty has ever been with. He can’t get her out of his head, no matter how hard he tries.

Hayley is shocked to find that she and Scotty are searching for the same person. And she’s not so sure that Scotty and his teammates are as innocent as they claim. But despite her doubts, she can’t help but be attracted to the sexy SEAL. That chiseled body, those dreamy blue eyes… It’s only a matter of time before she gives in to smoldering temptation.

But when the two find themselves fighting for their lives, they both begin to wonder… will they live long enough to confess how they really feel about each other?

Scotty is available on Amazon.