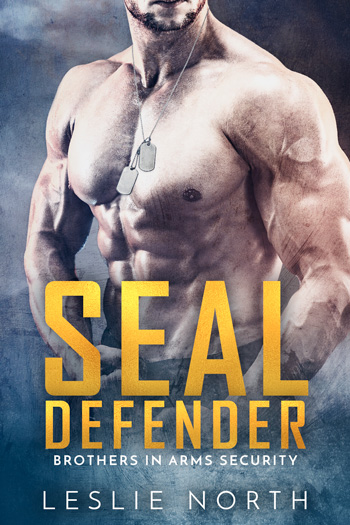 Mark Aleki Rogers left the Navy SEALs behind, but he found another use for his special skills. He and his fellow “Brothers-in-Arms” now run an intense boot camp that trains civilians to survive extreme situations. Mark’s size is intimidating, but the half-Samoan surfer is an eternal optimist. A suspicious string of suicides among SEALs, however, has Mark convinced it’s murder. He’s determined to get to the bottom of it…quietly. If he doesn’t, a murderer may go free.

Reporter Geneva Rios has come to the California coast looking for a story. The recent SEAL suicides are connected to the Brothers-in-Arms, and Geneva wants to know more. The interview she’s hoping for, though, comes at a price. The smoking-hot SEAL won’t talk unless she completes his training course. If she can survive Mark’s audition, she’ll have the angle she needs. Spending more time with Mark has its own perks, but for the exotic brunette, exposing the Navy SEALs is more than just a story…it’s personal.

As the heat between them reaches its boiling point, the pair puts more than their heads together. But with their own lives in danger, can they catch a killer before it’s too late?

If Mark didn’t know better, he’d think she was flirting. But they’d just met and he was cautious enough not to fall for every gorgeous woman in his path, no matter how tempting. Besides, for all he knew, Vann and Jace set this situation up just to keep him on the property.

Wouldn’t be the first time they’d pulled some shit like that.

“Sure you don’t need help?” He might be suspicious as hell, but he was still a gentleman.

“No.” She stared at him a moment too long, then turned back to her car. “Just checking my oil. Why don’t you like birthdays?”

“I’m an inquisitive girl,” she said. “You ex-military?”

Hackles up, Mark crossed his arms. Several reporters had descended on tiny Ortega, California after Jon’s suicide, most of them looking for the next hot, salacious headline to sell their story. Mark had refused to speak to any of them. He wasn’t about to start now either, regardless of how attractive said reporter might be. “Does it matter?”

Geneva pointed to one of the tattoos on his right bicep, an eagle holding a trident, with an anchor and a pistol in front. “Navy SEAL?”

“Right.” Geneva winked then tossed her rag aside and placed her hands on her hips. “I probably wouldn’t want to pledge my allegiance to them either after all the shitty stuff they’ve done.”

Both offended and more intrigued than he cared to admit, Mark stepped back and shook his head. “Tell me why the hell you’re really here before I evict you from the premises, Ms. Rios. If that’s even your real name.”

“Yes, it’s my real name. Would you pick that as an alias?” She gave him a deadpan look and crossed her arms, thrusting her breasts higher beneath the scoop neck of her tank top. “I’m here to see if you’ll let me interview you.”

Bingo. He decided to play dumb to see how far she’d take this. “For what?”

“I’m a reporter for the National Tribune. I’m covering the recent epidemic of SEAL suicides. You know, those guys who get discharged, come home, then off themselves for no apparent reason.” A flicker of dark emotion passed through her pretty hazel eyes before he could identify it. “Figured since you knew the last two victims personally, you might be able to give me some insight as to why they killed themselves.”

What happens next? Find out in SEAL Defender.