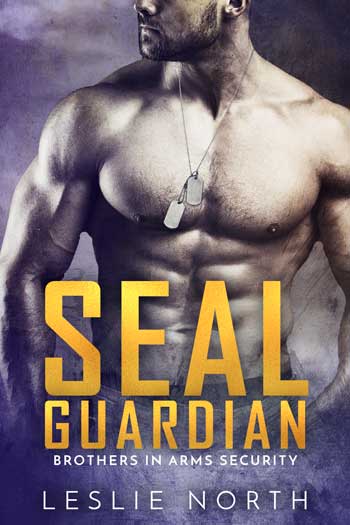 Ex-Navy SEAL Jace Stevens has never shied away from trouble and with the madman framing the Brothers-in-Arms for murder still on the loose, Jace is ready to put an end to the killing for good. Only one person stands in his way: a tough-as-nails FBI agent who suddenly won’t let Jace out of her sight. But the dark-haired beauty is more than just a complication. Jace can sense there’s something special beneath her buttoned-up exterior, and he can’t wait to get his hands on it.

FBI agent Felicity Belasko always gets her man, and this case should be no different. She knows the SEAL suicides are really murders, and she’s sure there’s a connection to the Brothers-in-Arms. But are they suspects…or potential victims? When her investigation leads to Jace Stevens, she can tell the blond troublemaker is masking something even more dangerous. He wants to stop the killer on his own, but Felicity can’t let that happen. Wickedly handsome Jace may be making her wild, but she always plays by the rules.

As the heat flares between them, a killer plots his next move. Can Felicity and Jace find a way to work together, or will a madman continue to get away with murder?

“I’d like to find out what you know about a man named Kevin Quinn.” She passed him a grainy black and white photo that looked like it had been taken from surveillance tape.

Jace scrunched his nose. The name sounded familiar but he couldn’t place the face. “Sorry.”

Felicity reached into the small messenger bag slung across her body and pulled out a file. “According to the records, he was a SEAL candidate in one of the Navy’s training programs you taught. Seems you played a major part in him flunking out.”

He picked up the picture again and narrowed his gaze. That had been quite a while ago and there were tons of guys who tried out for the SEAL program. First, they had to pass the Physical Screening Test—swim a five-hundred-yard breast or side stroke in under twelve minutes; a minimum of forty-two push-ups in two minutes; a minimum of fifty sit-ups in two minutes; six pull-ups; and run one and a half miles in under eleven minutes in boots and long pants. Most of them didn’t make it through that section. If they did, then they moved on to a grueling seven-month-long Boot Camp, designed to test their mental and physical stamina and leadership skills. In BUD/S, Basic Underwater Demolition, they learned Physical Conditioning, Diving, and Land Warfare. Each phase again had its own timed physical condition tests that grew more demanding each week. Once again, more guys were cut, until they were left with only the best of the best.

He squinted at the man’s plain features and mop of brown hair, recognition dawning. “Right. Yeah, I do remember this guy now. He was a piece of work. Kept blaming everyone else for his mistakes and thought we were all out to get him. He failed out of the program because he didn’t put in the effort. It was on him, not me.”

“We have reason to suspect Kevin Quinn may have a connection to the recent SEAL deaths.” Ted adjusted his position then winced slightly. “Sorry. Old injury. Still bothers me sometimes.”

“What kind of connection?” He had good instincts about people and Ted seemed like a decent guy, despite his occupation. The older guy grunted softly and gritted his teeth, obviously in pain. Jace smiled, hoping some small talk might get these agents to share more information. “War wound?”

“Got shot on duty about two years ago,” Ted said. “Presently biding my time now until I can apply for a teaching spot at Quantico and get the hell out of the field.”

Jace zeroed his attention in on Felicity again. From her exterior, she seemed all hard, jagged lines and tough edges, but his instincts told him there was a soft core underneath all that funeral black and attitude. He wouldn’t mind discovering it, if he had the time and opportunity. Unfortunately, neither of those things seemed likely. “What about you?”

She looked up from her file, her expression irritated. “What about me?”

“You biding your time too? Waiting for something better to come along?”

Felicity raised a brow, several shades darker than the long, pale hair on her head. “I don’t wait for what I want, Mr. Stevens. I go and get it.”

Felicity always gets want she wants, but she may get more than she bargained if she goes after who she wants. Find out in SEAL Guardian.

One thought on “SEAL Guardian (Brothers in Arms #3)”