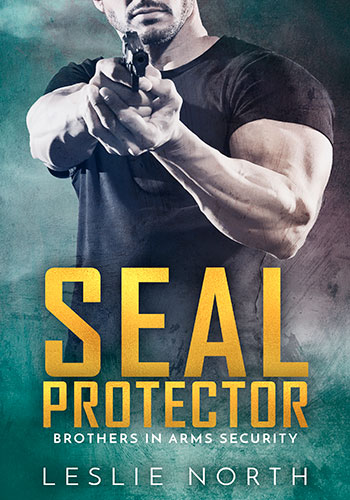 Ex-Navy SEAL Vann Highrider has given everything to Brothers-in-Arms, the boot camp he owns with his teammates. He’s facing his toughest mission yet—someone is framing the SEALs for murder. It’s up to Vann to clear their name to keep their business afloat…and his Brothers out of jail. The last thing he needs is more bad press from a stupid accident. So when he finds a petite brunette failing miserably at his survival course, the Cherokee tracker wants to send her packing. Yet there’s something about her he can’t say no to…. But if she wants a second chance, she’ll have to follow his every move.

Restaurant heiress Mercy Conde may be business savvy, but she’s always lacked physical prowess. If she wants to take her family’s empire overseas, though, she has to prove she can take care of herself. Brothers-in-Arms’ survival training seems like the perfect fit, but it doesn’t take long for this deep thinker to realize she’s in over her head. When tall, dark, handsome Vann offers to take her under his wing, she agrees to play things his way…especially when his way has her under more than just his wing.

Vann is used to being a lone wolf, but he’s eager to boost Mercy’s confidence both on the boot camp course and in the bedroom. But when their training becomes a real life or death situation, they’ll have to put their skills to the test if they want to survive.

One thought on “SEAL Protector (Brothers in Arms #2)”