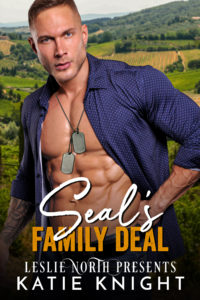 A Navy SEAL protects what’s his.

Two weeks of freedom and a steamy fling with a sexy Navy SEAL is all Princess Cassandra wants from George Ward. As part of the royal family, she knows her obligations—and they don’t involve falling for a man like George, no matter what her heart says.

When a family emergency leaves her as the heir to the throne, she must rush home to take on her new responsibilities—including marrying the suitable man her parents have chosen. There’s no place in that life for George…even when she discovers she’s pregnant with his child. A child that, as per her new husband’s demands, no one can ever know is George’s.

But when Cassandra’s life is in danger, the only one she can trust to protect her—and their child—is her old lover.

George never forgot Cassandra, but he has no desire to be her bodyguard. She’s a royal, and that’s not a world he wants any part of. Until she admits she’s the mother of his secret child—then all bets are off. No one hurts what’s his.

His deep attraction to Cassandra soon reignites, but she is about to take the throne as queen, and he’s just a retired Navy SEAL. Can he ever be anything more than her protector?

SEAL’s Family Deal is available from: