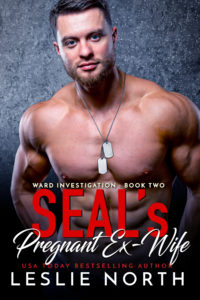 This Navy SEAL knows danger… but it’s nothing compared to fighting to regain true love.

Navy SEAL Lance Ward never thought he’d be in the position of seducing his ex-wife and protecting their unborn child—all while trying to solve his father’s murder. Yet, here he is, thanks to Ruth, the only woman who knows how to get under his skin—and under his clothes—in record time. The only problem is, Ruth has zero interest in getting back together. But he’s not so keen on letting her go a second time.

Ruth gave up on a happily ever after a long time ago. She’s not the same naïve young woman she was when she married Lance all those years ago. These days, she’s a successful, hard-hitting lawyer… with a soft spot for a certain SEAL who can make her blood sing—and for their unborn child.

But Ruth’s in a predicament. She’d hired Lance’s father to investigate suspicious deaths and then he’d met the same fate. Now it looks like the bad guys are after her.

As danger nears and her feelings for Lance burn brighter than ever, Ruth realizes it’s not just her life at risk… but her heart.

SEAL’s Pregnant Ex-wife is available from: