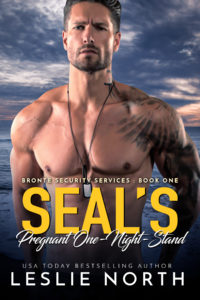 A one-night stand leaves this Navy SEAL with a surprise…

It was just supposed to be one night of no-strings-attached fun, but now Sofia Popov has become the center of former Navy SEAL Ian Campbell’s life. Sofia turns out to be the teacher of Ian’s teen son, Gavin—the same teacher who meets him in the hospital when Gavin suffers a seizure at school.

And he’s not the only teen who’s landed in the hospital. Ian is already formulating a plan to make those responsible pay, when Sofia drops a bombshell: she’s pregnant.

Sofia’s in way over her head—not only with Ian but also with a dangerous cartel that wants her silenced. While the police don’t take her concerns seriously, Ian’s private investigation firm does. And that’s a good thing, because this cartel wants to shut her up. Permanently.

She doesn’t think twice when Ian offers her a safe place to stay. Now it’s up to Ian’s private investigation firm to get to the bottom of things to protect the teens of San Diego—and the woman who’s winning Ian’s heart.