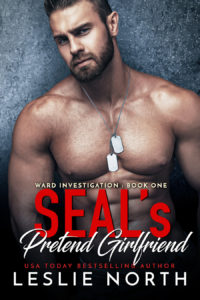 The past threatens to tear apart his new sizzling partnership…

Not wanting to turn into his absentee father, former Navy SEAL Neal Ward originally balked at joining his father’s PI agency. But when the man dies under suspicious circumstances, captivating PI Lori Hart drags Neal into the investigation. His reluctance disappears when Lori’s life is threatened—so he agrees to safeguard her when she suggests they fake a relationship to catch the culprit. But it won’t be easy concentrating on the case when Lori herself is so irresistible.

Lori’s starting to question her insistence they remain platonic. Faking a relationship is tougher than she thought. Touching each other and acting in love is driving her crazy, especially since Neal’s great at switching off their “relationship” in private. Doesn’t he feel anything for her?

Turns out, he does. A lot. But his resentment toward the agency for taking priority in his father’s life might win out. He refuses to fall for a PI and Lori won’t quit.

If only Neal would realize what a great team they’d make…in life and love.