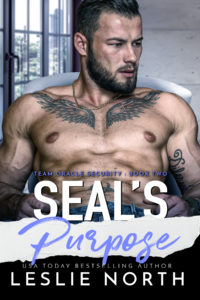 After a career-ending injury, former Navy SEAL Greg Harrison struggles to find his place in society. When his friend offers him a job working private security, he’s uninspired—until he meets his first clients. Mattie Salisbury and her cute daughter, Liza, immediately strike a chord with the tough SEAL, and he’ll do whatever it takes to protect them.

It has nothing to do with the fact Mattie is gorgeous—she needs help, that’s all. The museum she works for is supposedly haunted, and it’s ruining business. Greg is determined to keep things professional—that is, until Mattie tries to kiss him…

What a huge mistake—Mattie must have misread Greg’s signals because when she tries to kiss the hottest man she’s ever seen, it doesn’t go well. At all. But when Greg kisses her, only to apologize for his behavior, she can’t deny there’s an irresistible attraction. But neither of them needs the distraction while trying to solve the mystery of a volatile “ghost”. If only they could keep their hands off each other…

Or maybe the sexy SEAL’s mixed signals are a sign a future with Greg is about as real as the “ghost” haunting her museum.

SEAL’s Purpose is available from:

Team Oracle Security is available as a boxed set on Amazon, GooglePlay, iBooks, Kobo and Nook!