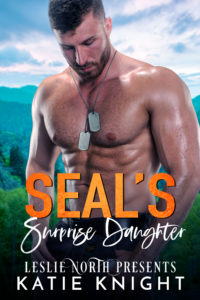 This Navy SEAL wasn’t looking for a family. Or romance…

When Navy SEAL Gabe Kelley gets a call telling him a woman he spent a weekend with last year has been murdered, he’s shocked to discover that she left behind a baby… And he might be the father! Gabe can’t ignore that kind of responsibility, but as an unmarried SEAL, he’s in no position to care for an infant.

Charlotte Rhodes has spent her adult life making her beloved Rhodes Tavern a success. Now her friend Alexis is dead, and baby Savannah needs a guardian. Charlotte remembers Gabe from high school, but the gruff SEAL who responds to her call is guarded, moody, and inconveniently handsome. Still, she sees the way he thaws whenever Savannah smiles.

When Alexis’s ex—who Charlotte thinks was her killer—files a petition for custody, Charlotte and Gabe have to work together to keep Savannah safe. Falling in love was never part of the plan… Gabe will do whatever it takes to protect his new family. But with a murderer on the loose, will it be enough?

SEAL’s Surprise Daughter is available from: