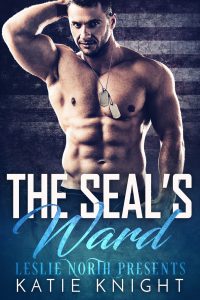 Former Navy SEAL Jed Tremayne knows discipline, hard work, and how to carry a rifle. So when his two best friends die suddenly and leave their daughter, Nala, in his care, Jed’s a little out of his element. Though he wants desperately to connect with her, Nala has withdrawn further and further into her books. Jed just needs a little help, and decides to hire a nanny, and who better than someone who loves to read as much as Nala does? Sure, Tess Frederick is a bit too intriguing, a little too sexy in an adorably unconscious way, but she instantly connects with Nala so Jeb gives her the job.

Tess likes things ordered. But lately, her well-planned life has descended into a bit of chaos. Haunted by the suicide death of her former lover, and recovering from her bookstore going out of business, an open position for a private tutor seems like the perfect job to take while she figures out the rest of her life. Nala is an adorable and intelligent little girl and the two have an instant connection. Her guardian, Jed, is another matter altogether. Too good-looking. Too intense. And too sexy by far. If Tess can just get through the next few weeks with her heart intact, all will be well. The thing with hearts, though, no matter how hard she tries, she can’t seem to turn hers off.

But as Jed and Tess begin to fall for each other, an unknown danger threatens their burgeoning love, a danger that blindsides them both and threatens their very lives—and the life of the little girl they both love. Can two broken souls find the strength to conquer this dark menace or will they be lost in the fight to survive?

Get The SEAL’s Ward from: