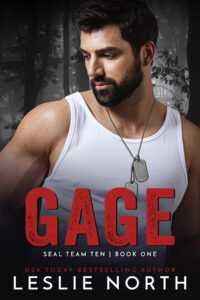 Shooting the SEAL has been re-published as Gage (SEAL Team Ten #1). This new edition has been revitalized and is even more entertaining than before.

Danger and desire are an intoxicating mix…

Navy SEAL Gage Jackelson will do anything to solve the murder of his friend… even get half-naked for a romance-novel cover shoot. It doesn’t hurt that the photographer is equally gorgeous and intriguing. But Anna Middleton is a distraction he can’t afford. Could she know more than she’s letting on? He’ll have to get close to her to find out. Really close.

Ever since Gage showed up, Anna’s quiet life has been turned upside down. First, her billionaire boss disappeared after an explosion rocked their office building. Then some decidedly sinister characters started following her. And the smoking-hot SEAL is driving her wild—not that she’s complaining.

She meant to keep their relationship strictly professional. But as they become further entangled in a web of danger, Anna can’t help falling hard. They’ll need to work together to make it through…but will Gage stick around once he’s ensured Anna’s safety?

Gage is from Amazon.

Saving the SEALs is available on Audible.