Snowed in with the Billionaire 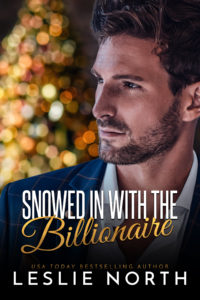 Will a Christmas surprise make both their dreams come true?

Brea Nelson is used to her family’s prickly attitude, but she’s determined to spend the holidays with them. Unfortunately, a major storm and serious car trouble complicates her plans.

Stranded in the middle of nowhere, she finds herself knocking on the door of the infamous George Clark, a cutthroat CEO whose name is all over the news. Brea is pleasantly surprised by his muscular body and striking good looks. But his cold, rude demeanor promptly douses what’s left of her holiday cheer.

Business always comes first for billionaire George Clark. But a near-death experience has forced him into hiding on Christmas Eve. When his solitude is disrupted by the shy but beautiful Brea, he’s less than thrilled at the interruption. But he can’t deny there’s something special about this plucky woman… Something that cuts through his arrogant exterior, and warms his cold heart.

One night may be all it takes to ignite a spark between these two strangers. But will a Christmas miracle be enough to keep them from going their separate ways?

Snowed in with the Billionaire is available from: