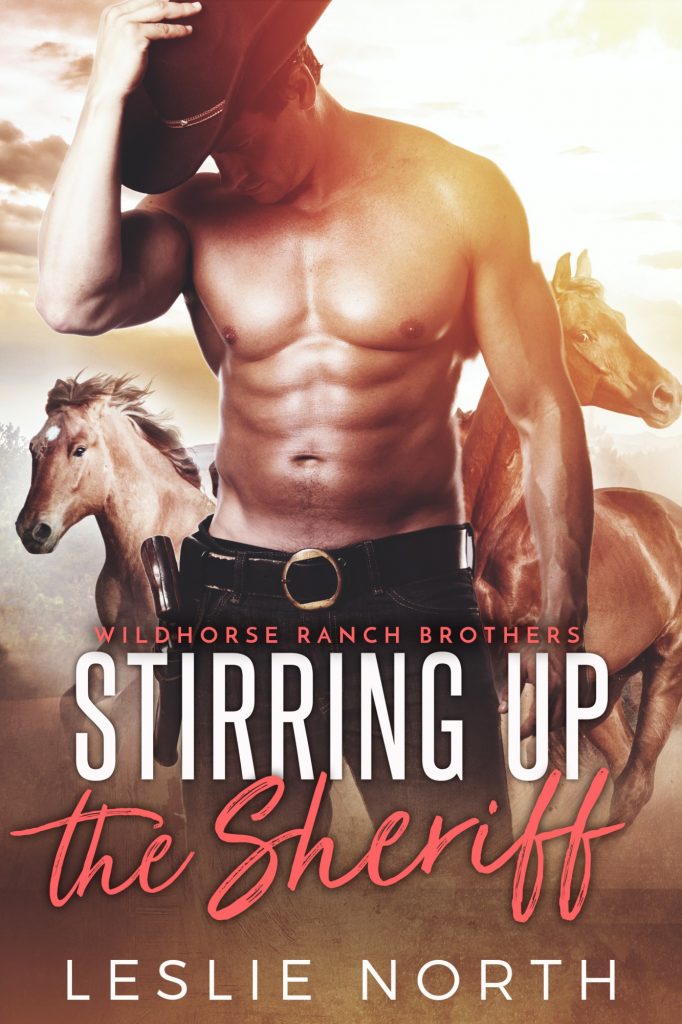 Are you ready for one last ride with some Wild men? Stirring up the Sheriff is the third and final book of the Wildhorse Ranch Brothers and it’s out now!

If you love a man not afraid of a getting filthy,

“I couldn’t put this book down it was packet full I loved the chemistry between Trent and Marianne… This is the third book and does not disappoint there is romance sexiness and lots of battle of wills!”

Moving back to Lockhat Bend wasn’t easy for Marianne Stanton. But the smart and sassy firecracker has come with a plan. She’s going to turn her Aunt’s old Honky Tonk into a sleek and successful brewery in the heart of Lockhart Bend. Proving that while her life didn’t go as planned, she could still take the town that judged her harshly as a child by storm. She’s set out to win the upcoming Battle of the Brews at the county festival. The plan is to do it solo…no matter what the annoyingly hot town sheriff has to say.

Sheriff Trent Wild has a dream—a dream that his favorite honky tonk will never change. For years he can kick back with a cold one and listen to country crooning on the jukebox as couples two-stepped their way around the floor. It’s a dream that’s in peril since master brewer Marianne came back to town, all grown up—and looking damn good—to burst his bubble. Now Trent needs to persuade Marianne that the Honky Tonk is perfect as it is…and that he could be perfect for her, too.

What starts off as a welcome back to town quickly becomes a battle of wills. Marianne and Trent will find themselves fighting for their separate dreams until a cherry chapstick flavored kiss proves juicier than expected. Now they’ll have to decide if living the dream is worth missing out on the love of a lifetime.

If you men with a lot of bite, you’ll love this!—grab Stirring up the Sheriff from:

As he rounded the corner to the bar’s backyard, that last thing he expected to find was such a hospitable view. He had been so absorbed with thoughts of what he might say to welcome Marianne that he hadn’t anticipated being welcomed by the sight of a very curvaceous female backside wagging in the air.

The view stopped Trent dead in his tracks. He watched as the denim-clad ass bobbed and wove before him like a hypnotist’s pendulum, swaying with complete unselfconsciousness, as the woman it belonged to cursed up a storm.

“Fucking dirt! Fucking store-wrapped goddamn mystery seeds! Argh!” Her growling and grumbling was almost bestial. If it wasn’t for her tantalizing figure, Trent might have mistaken her for one of the rougher cowboys he had to deal with sometimes down at the Tin Horseshoe. He listened for a few seconds longer, his smile hitching itself up one side of his face, before he cleared his throat to let her know he was there.

The woman shot up like a startled cat and dropped the seeds she was holding. She revolved more slowly to face him, her expression one of dismay before they had even locked eyes. Trent’s smile died instantly, but it wasn’t due to anything the woman had done wrong.

He hadn’t expected her to look so…angelic. In contrast to the mature figure and salty language on full display, the woman had a round, youthful face, with wideset sky-blue eyes and a pensive pink mouth. Her skin—where it wasn’t covered with dirt—was porcelain-white, a complexion he hadn’t seen on anyone around these parts for a very long time. She removed her sunhat quickly, revealing a gorgeous head of chocolate-brown hair tied back messily at the ivory nape of her neck. She was a vivacious mix of color contrasts, none of them local, and Trent took a second to catch his breath before asking:

“Marianne Mantel?” She looked too young to be Celia’s adult niece.

“Stanton. Marianne Stanton.” The woman removed one gardening glove to shake his hand. “And you’re Sheriff Wild, aren’t you? I mean…I guessed as much from the uniform,” she carried on hurriedly.

Trent relaxed his posture and hooked his thumbs through his belt. “My reputation precedes me.”

“My aunt used to talk about you a lot.” Even as she spoke, Marianne’s eyes wandered to the seeds scurrying away from her. A thin stream of water from the garden hose was sweeping them off down one of the trenches she had dug. “Not sure I can promise you the same bottomless pint Celia always had on tap for you, but I’ll try my best.”

“Sorry,” she added quickly. “I didn’t mean to come across as…I just meant I’m expecting a lot of growing pains with the transition. As you can see.” She laughed and gesticulated toward the little garden plot she was in the process of drowning. Trent liked her laugh. It was clear and breathless and genuine, a pretty rebuke to all outward evidences of stress. “Really. I promise I’m not being stingy. I’d love to buy you a drink.”

“That won’t be necessary,” Trent said.

“Did I say ‘buy you a drink’?” Marianne’s laugh came again, more forced this time, and she looked embarrassed. “I meant offer. Offer you a drink.”

And I’d sure as hell like to take you up on that offer, Trent thought. Instead he said aloud: “Anything I can do to help?”

Find out what happens to Dylan in Healing the Quarterback. It’s available at…