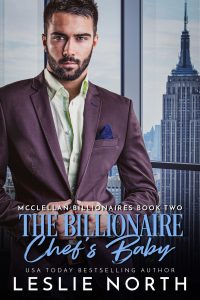 Covered in tattoos, sarcasm, and muscles, Arthur McClellan is the best thing to come out of the kitchen since sliced bread. A billionaire from birth, his trust fund hasn’t stopped his drive to achieve his dreams of celebrity chef status. However, a dying wish from his mother has caused him to pivot his aspirations. Instead of being the “bad boy,” he now wants to join the ranks of the happy chefs of the Taste Network. It’s taken a lot of convincing, but he’s finally landed a show: a wedding special filming in the Bahamas. But the network doesn’t trust him alone. They want a romantic interest: a perfect, bubbly wedding planner to soften his edges. Arthur’s not mad when they pick a wedding planner he’d had a single, very passionate night with. In fact, she just might be the cherry on top of his food show cake.

Cassandra Kelly has been winning the wedding planner game for years, and she wants more: national coverage for her creative celebrations. So when the Taste Network offers her the position of wedding planner on their new pilot, Cassandra jumps at the chance. The only catch? She’s got to be the “girlfriend” of famous bad boy Arthur McClellan— a position not unappealing to her after a celebratory night of passion that left her with a continuous craving for the chef… and an unplanned bun in the oven.

Now, they’ve got to fake their relationship on screen while wading through their real relationship off. They both agree the baby should be kept secret until they’re ready to spill the beans. But when a careless conversation reveals all to the producer, who thinks a secret baby would make for a great reality TV series, they have to decide how real they’re willing to get and how much their romance can weather for their careers. For two people who want to live in the public eye, they must decide how much of their passion they want to keep private.

The Billionaire Chef’s Baby is available on: