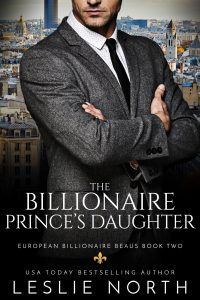 It was only supposed to be a one-night stand. A bit of glitz, glamour, and champagne with one of the world’s most eligible bachelors. What single woman—and Amy Branch was certainly single—could possibly resist Artur, Prince of Stolvenia, who made a living out of being charming? He sure charmed her, all right. Charmed her right into a night of passion that resulted in a little present neither of them were expecting.

Now, all Amy has to do is find a way to tell Artur that he’s about to become a daddy. Easier said than done, but after months of trying to get word to him, she finally gets her chance. The playboy needs to be reformed to make the royal family more palatable to a country on the verge of voting to abolish the monarchy. That means Artur’s wild ways will have to end—with the help of a PR expert. A PR expert who just happens to be carrying the prince’s baby. What could possibly go wrong?

Artur has begrudgingly agreed to have his image molded, but to his happy surprise the PR wrangler is the same sizzling hot woman he’d shared an intense night of passion with a few months back. He’s happy to pick up where they left off—until she turns to the side, exposing a noticeable baby bump. But Amy has no intention of using the baby to net herself a princely groom. Indeed, she seems intent on throwing Artur at every eligible woman in Stolvenia except for herself. Problem is, the only woman Artur realizes he wants to be with is Amy. Even more unfortunate, he has the audacity to fall in love with her.

Now he somehow needs to convince Amy that being a family, even if it’s royal, is just what she needs.

Get The Billionaire Prince’s Daughter from: