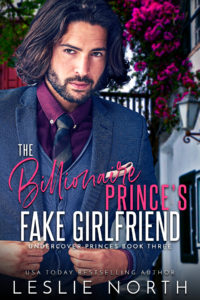 A royal scandal leads to an attraction they can’t deny…

Reeling from the discovery that his father hid an older sibling from him, billionaire prince Benoit Georges Moreau goes undercover at a British newspaper to track his half-sister down. Unfortunately, the fiery reporter he’s assigned to work with recognizes him instantly. The jig is up—or is it?

Jane has built her whole life on seeking out the truth. After living in the shadow of her father’s lies for years, she leaps at the chance to uncover a royal exclusive. If she can help this handsome prince solve a decades-old mystery, he’ll let her break the story about this shocking royal secret. For Jane, it’s a once in a lifetime opportunity to advance her career as an investigative journalist.

But as they spend more time together, the fake relationship they craft to conceal Ben’s royal identity starts to feel all too real. And it quickly becomes impossible to deny the chemistry between them.

When the truth leads to betrayal, will their undeniable attraction be enough for them to take a leap of faith?

The Billionaire Prince’s Fake Girlfriend is available from: