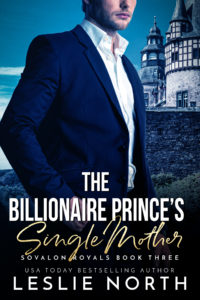 After being ditched by his fiancée before they’d even reached the altar, Prince Aldon of Sovalon heads to his quiet, secluded Thistledown Castle to lick his wounds and try to find some peace. Instead, he finds his gorgeous groundskeeper, Piper McKenzie, and her five-year-old, not-so-quiet daughter, Willa. Though he thought he was longing for solitude, Aldon finds himself delightfully distracted by Piper again and again. Piper is not only beautiful, she’s loving, caring, and opening his eyes to things he’d never noticed before.

Single mother Piper loves her idyllic country life with Willa, taking care of Thistledown Castle and working on the gardens. Aldon’s arrival turns everything topsy-turvy. It’s been a long time since a man has turned her head, and Aldon has hers spinning like a top. Despite her instant attraction, Piper reminds herself that Aldon is a prince and doesn’t seem to be a fan of kids. Definitely not the man for her. Princes don’t marry groundskeepers, they marry the type of woman he used to be engaged to, the same woman Aldon’s father is insisting he reconcile with. Though Piper might be falling in love, she’s smart enough to realize a fairy tale ending is not for her. Secretly, though, she’s hoping this Prince Charming proves her wrong…

The Billionaire Prince’s Single Mother is available from:

Sovalon Royals is now available as a boxed set on Amazon, GooglePlay, iBooks, Nook and Kobo.