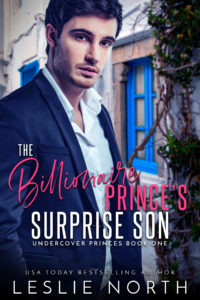 Only love can heal a broken heart…

Two years after abruptly leaving his residency in America—and the woman he loved—Nicolas Frederick Hansen, billionaire and Crown Prince of the Isle of Mynia, is determined to make his country’s children’s hospital the best in the world. Nic lost his brother years ago, but he found new purpose in following his brother’s footsteps, studying pediatric medicine. He adores children, though he’s nowhere near ready to have his own.

When former flame Summer Rand shows up at his hospital for a fellowship program, she’s astounded to discover that the man who abandoned her years ago is secretly a Crown prince! And Nic is equally shocked when she reveals they have son named Harry. Determined to make it work, they agree to focus on their child…

But the passion they could never deny soon consumes them both. And it isn’t long before dreams of a perfect family clash with Nic’s devotion to his new career.

Can the two of them make this royal romance work? Or will they lose their shot at a future they never thought they could have?

The Billionaire Prince’s Surprise Son is available from: