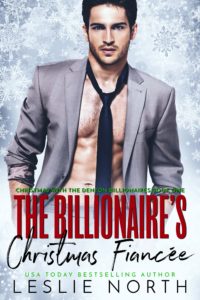 All his life, billionaire hotelier Josh Denton loved only one woman—his mother, who died a few years back. So when the Cedar Grove Resort and Spa, a place where he’d spent the last Christmas with her, comes on the market, he allows a bit of sentimentality into his heart and sets out to purchase it. Sure, the place is a bit shabby, but he wants it. Problem is, the current owner is a family man, who won’t take kindly to his hotel being sold to a slick, single New York billionaire. When Amelia MacTaggart, his efficient and effervescent assistant, who just so happens to come from Cedar Grove, walks into his office, a plan starts forming. Amelia can act the part of his fake fiancée over the Christmas weekend at the hotel, and in return, she’ll get that promotion she’s been angling for. Seems like a win-win. And it is, until the ‘fake’ relationship between them starts getting a little too real, too fast. What’s a hot hotelier to do?

While Amelia readily agrees to participate in the farce, she feels guilty lying not only to the hotel’s grandfatherly owner, but also to her own family. Still, it’s not such a difficult task pretending to be in love with her sexy boss. If only she’d known that one kiss would turn their platonic ruse into the real deal. If only Josh weren’t being so nice, so fiancé-like. Sexy bed time aside, Amelia finally reminds herself of the brutal truth: This is all about business, about Josh’s obsessive need to win at any cost. She knows that. But as Christmas approaches and their hot romance turns decidedly frosty, Amelia begins to wonder if the only Christmas gift she is going to receive is a broken heart.

The Billionaire’s Christmas Fiancée is available from: