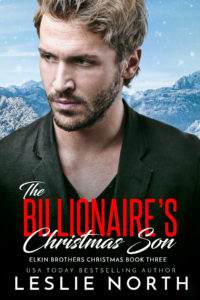 Golden boy of the family empire and billionaire CEO of Elk Lodge, Jonas Elkin is in for the shock of a lifetime after he hires a photographer to shoot family portraits as a gift to his dying grandmother. When Rachel Alexander, his steamy one-night stand, shows up, Jonas must face the unexpected consequences of their actions three years ago: he has a son.

Rachel never expected to see the father of her son again. She definitely didn’t expect him to be in charge of the ski resort she met him at. She almost wishes she could say no to Jonas’ request for family portraits, but without enough money to pass up the job, she’s not only forced to work during the Christmas holidays, but has to push aside her lingering feelings for Jonas and what they could have been.

But then Jonas reveals he still has feelings for her and wants to get to know his surprise son; on one condition: they have to keep the baby a secret from Jonas’ traditional family. He’s used to being the alpha male, in control of every situation, but Rachel refuses to be told what to do, especially when it comes to her son. Will they be able to overcome the differences that threaten to tear them apart, or will Jonas’ family finding out about their past destroy their chance at a future?

The Billionaire’s Christmas Son is available from: