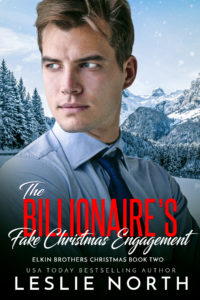 Gabe Elkins, President and CEO of a Silicon Valley digital security tech firm, has just launched another successful app. But instead of celebrating, Gabe learns his grandmother is sick and he has to return home to make her last Christmas a memorable one.

Gabe’s family has never been impressed by his corporate success and they’re constantly hounding him about marriage. He wants nothing more than to give his dying grandmother the news she’s been waiting years to hear—that he’s finally engaged. If he’s going to pull it off, he’ll need the help of a professional miracle-worker, and he knows just who to ask—his intelligent, gorgeous, and impressive as hell conference liaison, Anna Waters.

Anna has just been offered the job of a lifetime: Agree to be this bad boy billionaire’s fake fiancée for the holidays at his family’s luxury ski resort, and he’ll help her build her private conference consultation business. The idea is more attractive than Anna would like to admit—almost as attractive as the man proposing the charade.

Once Anna agrees, she is quickly swept up in putting on the biggest show of her career. Except, the more time she spends with Gabe, the less their sweet moments and toe-curling kisses feel like acting. And when the lines between the charade and reality start to blur, Gabe and Anna are faced with deciding if their relationship could work in the real world or if their romance only shines under the twinkling Christmas lights.

The Billionaire’s Fake Christmas Engagement is available from: