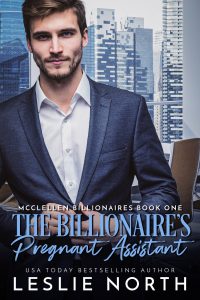 Billionaire Connor McClellan has a secret weapon: Rosalie Bridges. When he woos a potential client, Rosalie accompanies him as his “date”. But after their last meeting ended in a night of passion between the two, she isn’t returning his calls—and he needs her now more than ever to win a huge client.

Rosalie has been drawn to her outrageously sexy boss for years. But after they finally hooked up and he still wants to keep their relationship professional, she decided she was done being used. Of course, a positive pregnancy test does complicate matters.

With Connor desperately needing to land this deal, and Rosalie no longer willing to be a part of his fake relationship scheme, a deal of a different kind needs to be struck. If the two of them can pull this off, they may land the deal, and the love, to last them a lifetime.

The Billionaire’s Pregnant Assistant is available on: